Most days we keep the roll up doors on the shop open and when we go to close them in the evening, we make sure we know Cat is out of the shop so she doesn’t get locked in and have to let herself out . . as I caught her doing once when she had been locked in the shop. 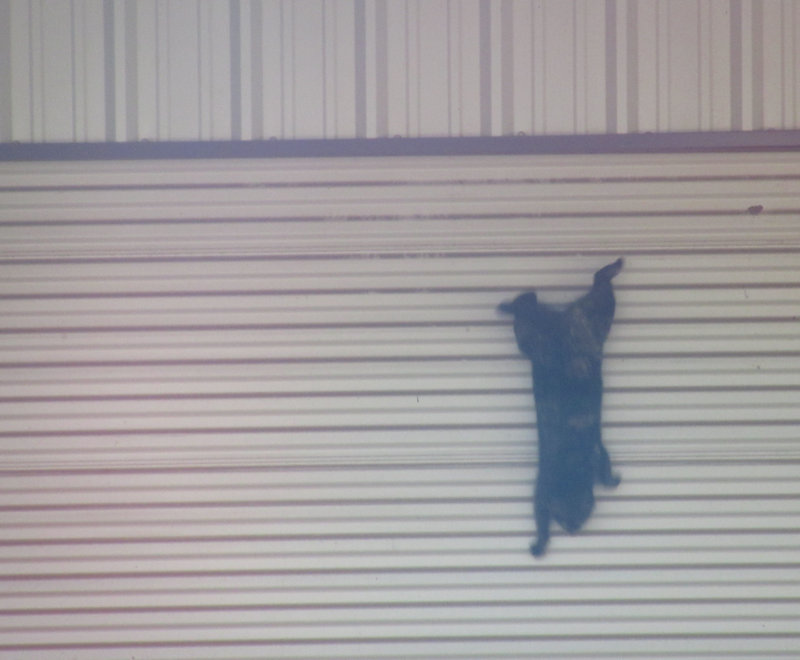 Last night I didn’t see her anywhere outside and Vince wanted to close the shop. I called her and she didn’t come. He went into the shop and made lots of noise, hoping she would run out if she was in there but he didn’t see her. He went ahead and closed the doors.  I kept thinking I didn’t want her left in there having to figure out how to get out so I went over to the shop, walked around, called her, looked everywhere, didn’t see her and when I came out, as I passed by the RTV, as Vince and I had both done several times already while looking for her, I noticed she was stretched out — sleeping in the seat of the RTV. She saw me . . she knew I was there. She heard me calling her and she never budged.

Boots seems more like a dog . . he comes when you call him. He hides when he’s playing but for the most part, I almost always know where he is and he doesn’t seem to constantly be wanting to prove to me that he’s going to do what he wants to do, no matter what I want. Cat, on the other hand, must be more like most cats in that she’s so independent, I think sometimes she goes out of her way to prove to me that no one is going to tell her what to do.

That reminds me of another story . . when Vince and I had been dating for a while and because our “dates” almost always were us meeting in Florida or Houston or me going to Georgia on the weekends Chad was with his dad, mainly because in the beginning I had no idea where our relationship was going and I didn’t want to introduce lots of men (there weren’t lots of men but at that point, I had no idea how things were going to turn out) to a 6 year old, Chad had not met Vince. When Vince and I decided this might be going somewhere, we decided he and Chad should meet and spend some time together.

We got a condo in Florida and Chad was normally a sweet kid. I had never seen him be really mean to anyone and even though he was hard headed and spoiled, he was respectful, most of the time. He and Vince butted heads a few times that weekend, always when I was not around to intervene (which has continued to happen for 20+ years now). Vince told me some things Chad had done and said and I couldn’t help but believe Vince, not being used to a young boy, was exaggerating a bit until  . .

We were getting ready to leave and Vince was carrying our luggage out to the car. Chad was sitting in the floor, right in front of the door, with Legos everywhere. Vince, trying to step over Chad and the toys, with the luggage in his hands, said “Chad, could you move your toys out of the doorway so I can walk?” Chad, not knowing I was coming down the stairs, looked up at Vince and very defiantly said “Ain’t no Laquidara going to tell me what to do!” Ouch!

Sometimes when I’m out calling Cat, that story surfaces in my memory. I can just see Cat sitting there, hearing me calling him and saying “Ain’t no Laquidara going to tell me what to do!”