Coffee doesn’t float my boat, though I’ll drink an iced coffee every now and then . . made from the coffee Vince doesn’t drink. When we were in Louisiana and were on our “King Cake” binge, I bought one package of King Cake Coffee. Chad and Nicole bought one too and they made coffee with it and it smelled so good. 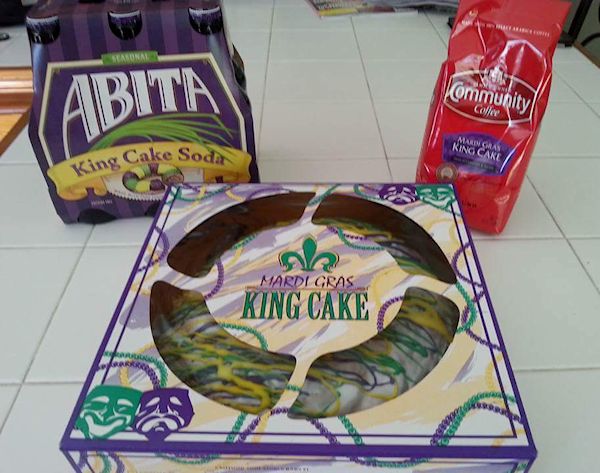 As soon as Chad made coffee using it, just the smell had me wanting some. I told Vince I had bought him a bag and I told him how good it smelled and asked him if he wanted more. He told me that he only liked dark roast and when I checked the bag, it wasn’t even close to dark roast so I didn’t plan to get him any more. When we went back for our last visit to the grocery store, Chad bought two or three more bags and I said . . heck, I’m going to get one more for Vince.

When I got home with it, he made a pot and he said it was good but it was for special mornings . . not the kind of coffee he wanted every morning. I’m not sure why but he used it again the next morning and then he had me checking online to see if I could find more of it. He’s used it every morning and several times a day, he says “I wish I had more of that coffee!” I found it at Community Coffee but it was a bit more expensive than we had paid at Walmart so he said “No, don’t order it.”

Then . . our conversation last night:

Vince:  How long does crawfish season last?
Me: Probably til May . . til it gets too hot.
Vince:  Want to go to Louisiana and get boiled crawfish?
Me: It’s a 7 hour drive. I think we can find boiled crawfish closer than Louisiana or we can get a bag from Kroger later and boil our own.
Vince: But if we go before Mardi Gras, I can get more coffee!

Vince, Vince, Vince! Not that I would ever squawk about a trip to Louisiana but seriously, I haven’t even been home for a week yet. Pay the extra 50¢ and order it!

I just placed an order from Community Coffee and there’s a promo but it says ends today that offers free shipping on orders of $25 or more. If you want King Cake coffee . . order yourself some today and get free shipping. Of, if you’re lucky enough to live in south Louisiana, or any other place that stocks it, rush out and get you some before it’s all gone!

I can’t vouch for how it tastes but I can tell you it makes me want a big sugar cookie with purple, green and gold icing every time I smell it.