When we first decided that we wanted to get away from the hybrid chickens and start raising heritage breeds, we weren’t sure which ones we wanted. Oh, I was sure . . I want them ALL!  We got a variety of eggs and hatched them .  . having not great results but we did end up with at least a few of all the breeds we tried to hatch in the last batch. They’re all starting to grow up now and we still aren’t sure which ones we’ll focus in on and continue with but here’s what’s happening with them all. 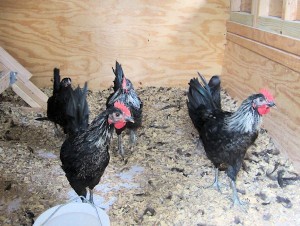 The Iowa Blues. I really like them. I like the story about them. Yes, I joined the Iowa Blue Chicken Club! Yes, I need to get a life . . and finish reading the thermodynamics book!  🙂

Seriously, one of the descriptions I read about them said they have a delightful personality and a very expressive face and they do!  We got six when they were the feature breed at Tractor Supply. Three turned out to be roosters and three turned out to be hens. We can’t keep all three roosters . . that’s what Vince says anyway. I believe all three in the photo above are roosters. The hens don’t have the white on their necks.

This picture shows all six of them. 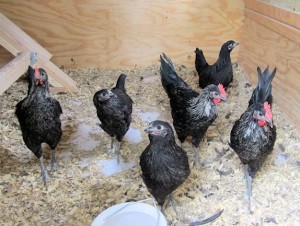 When we’re feeling patient and energetic, we’re going to move them into the coop with the red chickens. That will give me 13 hens and 3 roosters. I might can keep 2 roosters with 13 hens but I’d rather have at least 18 hens for 2 roosters . . we’ll work all that out later. 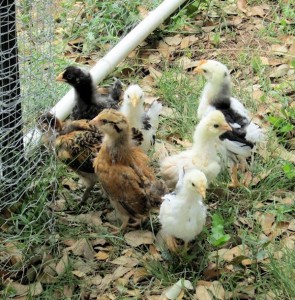 These are some of the last batch to hatch. The little yellow/black chicks are Anconas and they’re Vince’s favorite. It helps that they’re an Italian breed. He thinks they’re so smart! Of course, Vince is just a little biased . . an Italian chicken HAS to be smarter than any other chicken, right?  The Anconas will grow up to be black with white dots. They’re supposed to be good foragers, good layers (large white eggs) but not very people friendly. I would say something here but I won’t!  🙂

I believe I have 2 girls and a boy so that’s good. Others in that picture are the two Buff Lace Polish (light with little bump on his head), an Ameraucana, a Dominique and a Welsummer. 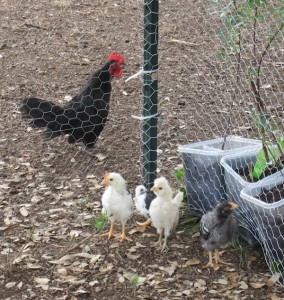 This is another picture of a few of them with Screech in the background (adjoining pen) showing off . . with his screechy little crow!

Another batch of babies . . 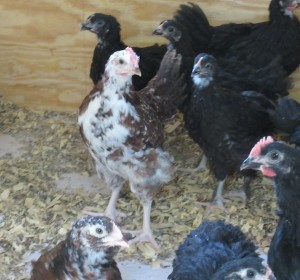 The two speckled ones are Speckled Sussex and there’s a boy and a girl. Most of the others in this coop are Black Copper Marans. Just my luck, I think I have 4 roosters and 5 hens and I can’t keep all those roosters. There are a couple of other breeds of chickens in this coop but they aren’t in the picture.

Really, once we get the rooster population down to where it needs to be, considering that the bantams are pretty useless and we only have them because they’re cute and therefore, I’m not counting them in my overall chicken numbers, we really don’t have too many, do we?