Several weeks ago I made and canned chicken and sausage jambalaya. I ended up with 18 quarts and didn’t want to make more til I knew if we were going to like it and if it was going to turn out the way I had hoped it would.

Tonight, we were both exhausted from working on the chicken coop. This was the kind of evening canned food was made for! 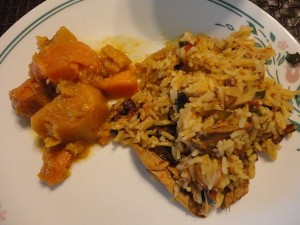 There was already some leftover eggplant salad from the freezer, so I opened a jar of sweet potatoes, fixed the jambalaya and we had an amazing dinner. 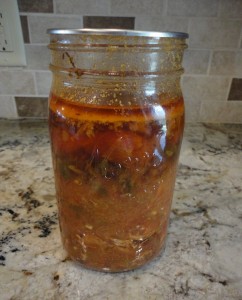 Jambalaya in a Jar

This is what the jambalaya looked like in the jar. I drained the liquid to see how much liquid was in there. 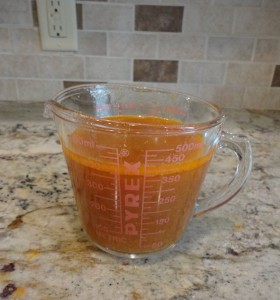 There was about 1-3/4 cups of liquid. It would have helped if I had turned the measuring cup the right way so the cup measurements would be showing! I added enough water to make it 2 cups, poured that into the pot with the remaining contents of the jar, brought the liquid to a boil, added 1-1/2 cups raw rice and cooked it, covered, on low, til the rice was done.

It was delicious  .. some of the best jambalaya I’ve ever had! I will be making more of this next week.