Yesterday I was in the kitchen the entire day. There were still two pork butts left from the sale at Kroger so I smoked those and made jambalaya.

Vince had meetings all the way through lunch and he had a dinner meeting so he was gone from about 7 a.m. til about 8:30 p.m. so I knew that was a good day to get some time intensive canning done. It’s real hard to start a big canning project early in the morning and be done by the time he comes home for lunch or, to start it after he goes back to work after lunch and be finished by the time he gets home from work and I know he doesn’t enjoy sitting and listening to the canner hiss and sputter. 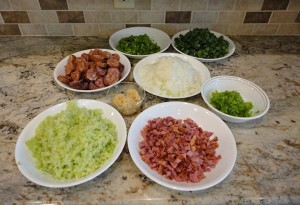 Meats include andouille, tasso, bacon and chicken. The first thing I did was brown some chicken breasts. For this recipe, I used breasts with bones and skins. I added bay leaves, garlic, onions, celery, black pepper and salt to the water and ended up with a nice rich broth.  There were two pots going so this is half the broth I ended up with. 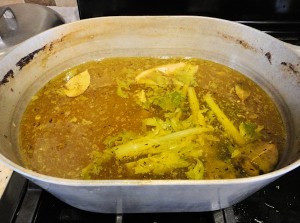 The bacon was cooked, and the sausage and andouille were browned. 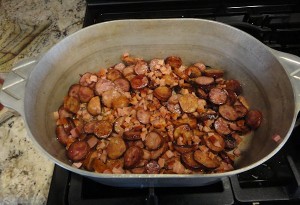 The meat was removed and the veggies, except the green onions, were sauteed in the oil. Then a little broth and several cans of home canned tomatoes were added. 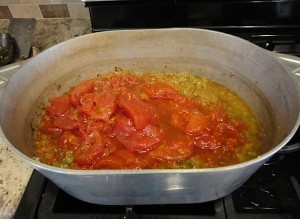 The Start of Jambalaya

The meat was added back in . . the seasonings were added. At the end of the cooking time, the green onions were added. Doesn’t this look so good?  Once I filled all the jars, there were about three spoonfuls left in the bottom of the pot and I gobbled that up . . which only left me wanting more! 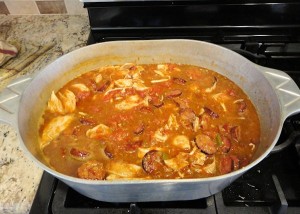 For the jambalaya, I can it in quart jars because it needs enough liquid that, when it’s time to cook this for serving, I can add rice to the contents of the jar, then simmer or bake it all (raw rice and contents of jar) til it is done. 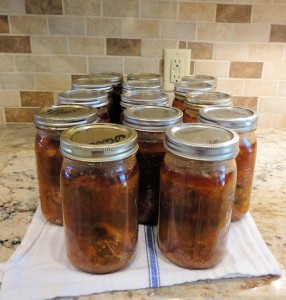 I ended up with 18 quarts of yummy jambalaya . . it’s so good that I can’t wait to open a jar of this and serve it.  All I will need is the rice, and a big salad and we will have one of our favorite meals. 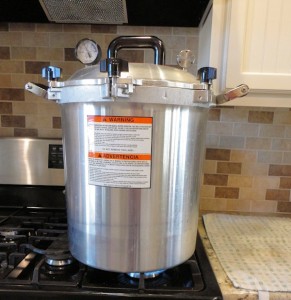 That’s over a month’s worth of dinners done in one day! I was tired but it was so worth it.