Several times in the past I’ve written about making salads ahead and storing them in a jar and having them ready to serve. Here’s one of the blog posts. It’s just so simple and is probably one of the best time saving things I do in the kitchen. With this new healthy eating, we’re eating lots of salads. 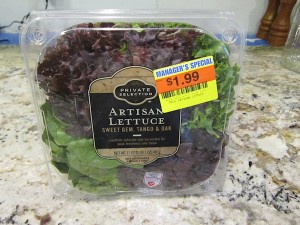 Last week when Vince and I were at Kroger, I came across two of these marked down variety packs of lettuce. I love different types of lettuce and the ice storm pretty much ruined the lettuce in the garden. These both had January 1 as the “best used by” date and we were shopping on 12/31. Vince asked if we could use both of them before they went bad. Oh, yes . . it will be fine sealed in jars. 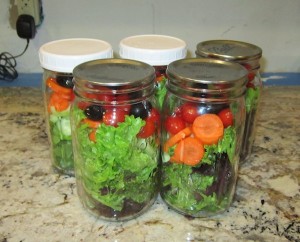 Tomatoes, black olives, cucumbers and carrots were added to the lettuce. Instant salad! It was so nice to be able to open a jar and use those without having to wash everything and make the salads. The two that were going to be used for lunch and dinner on the days I made them didn’t get sealed but the remaining ones were sealed.

We have friends visiting from Kansas City so it was time to make more salads. Since four of us will be eating, I used half gallon jars. 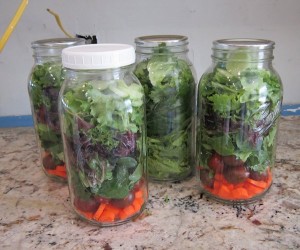 Three salads for three nights. Jeanne and I were talking so much last night that I totally forgot to serve the salad so now they’re going to have to stay an extra night!  🙂

There are three jars of salad for tossed green salad and the jar with just lettuce and spinach will be the base onto which I add chicken salad for lunch today.

If you have a FoodSaver with a jar sealer attachment, you really must try the salads made ahead and sealed in jars.