Several years ago I got into the habit of making salads ahead of time and vacuum sealing them in quart jars. There were several blog posts about it but here’s one that gives you the general idea of what I do. Any ingredients can be added.  If you haven’t tried this method, I think you’ll be surprised at what a time saver this is.  It takes hardly any more time to wash the lettuce and tomatoes and slice the cucumber and assemble all the ingredients to make half a dozen or more salads than it does to make one. When I don’t have salads made up ahead of time, it’s rare that we have salad.  It seems like so much trouble to get all the ingredients out, wash, and prepare them when I’m already in the middle or near the end of cooking.  It is so easy to open a jar, dump the ingredients into a bowl and fluff the lettuce up a bit.

I started making these salads yesterday at 12:33 p.m.

Nothing was washed or sliced but all the ingredients were out and the jars were ready. 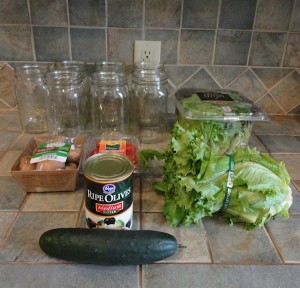 The salad ingredients were washed.  The cucumber was sliced, the lettuce was torn. 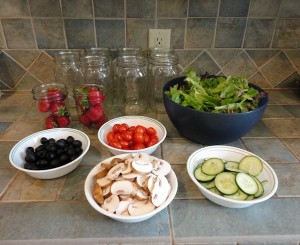 I’ll explain the strawberries later.  If I were making this and wasn’t doing a blog post, I’d put everything directly in the jars and not mess up the bowls. 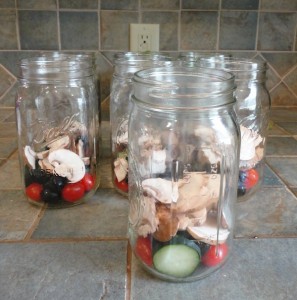 Some folks recommend putting the heavy stuff in the bottom of the jars.  By heavy stuff, I mean cucumbers, tomatoes, olives . . and then put the lettuce on top but I do it both ways and have never had any problems. 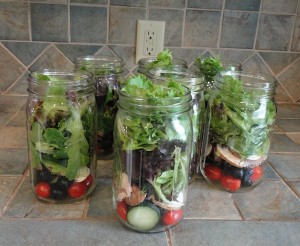 Once the jars are filled, vacuum seal them either using a regular counter top Food Saver or a hand held unit. 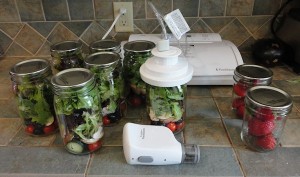 I’ve kept these salads at least two weeks and they are completely fresh when I open then. 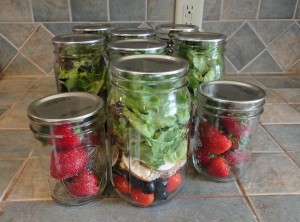 It took 23 minutes and that includes washing everything, sealing the jars and taking Speck out once!  Not bad for 7 days worth of salad.  All the tomatoes were used so there are none to go bad.  The whole can of olives was used so none of those to store.  The whole cucumber was used.

I keep extra lettuce always so if we ended up having a guest for dinner, there’s enough tomatoes, mushrooms, olives and cucumber in the jars that I could simply dump it all into a bowl, add more lettuce, toss and we’d have plenty to make three salads.

I find this way of making and saving salads to be so efficient and we eat a whole lot more salads by having them made and in the fridge.