Whew . . that was pretty painless!  As soon as the electric company was ready to cut the power, I left and went to Ag Mart to discuss the problem I’m having with my peas and while I was there, some old guy was telling me a magic formula for controlling the grasshoppers.  The lady who used to be the vet tech at Speck’s vet works there I spent a while chatting with her.  Then I went to Taco Casa for lunch for the guys and took my sweet time about getting home.  Shortly after I got back, the power was back on! 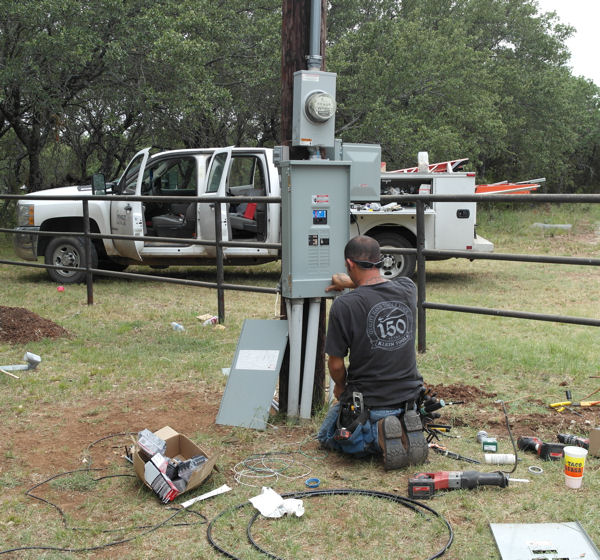 Last week I was pretty aggravated with this guy and he knew it but today, he’s my favorite electrician.  I really do like him.  Sharyland is the electric company that sends out those goofy smiley and frownie face letters but they were very quick to get a lineman out here today so I won’t gripe about my frownie faces anymore . . maybe.

The electric company said they would send a lineman out to cut the power and pull the meter.  Once we got it all put back together, we were to call them and they’d send him back to install the meter and turn the power back on.  Before he turned the power off, I said “Do you promise you’ll come back today?”  He said “I came from Brady so I’m just staying til the job is done!”  Nice!!  He couldn’t believe how our power was hooked up . . I won’t even say what he said about the electrician who did all the work here when this place was built.  It was not an electrician from Grimsley Electric! 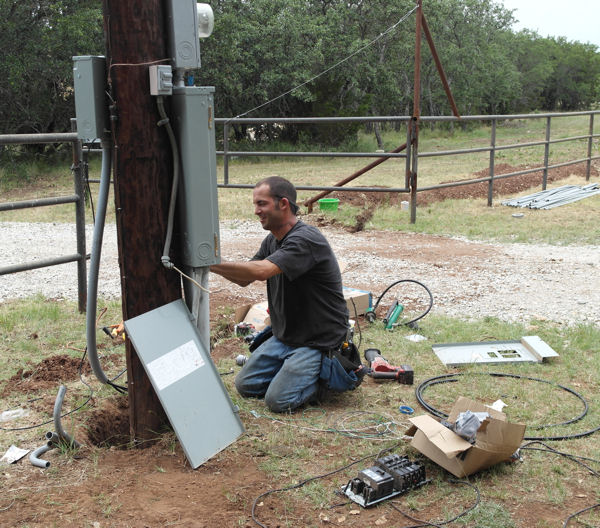 Chris thought it was hilarious that I was blogging about getting my power back on.  See him grinning?

Anyway, the box that was there, so much of it was stripped that they had to replace the whole box and everything in it.  The lineman came with a bucket truck because he wasn’t sure what he was going to need.  Thank goodness he did because once they saw what a mess our box was, he had to change out some of parts on top of the pole to accommodate the new box.

It’s still not right but it’s as right as it’s going to get today.  Chris will be back tomorrow to finish up.  I think he said he needed more breakers . . something.  At least I have power now though.

It’s pretty frightening when you truly realize how dependent we are on electricity.  I was going to have the guys eat in the house so I brought Speck and my tacos over to the sewing room, thinking I would read email while eating.  Nope . . no electricity.  Then I thought I would iron, or vacuum.  Nope, no power.  Then I thought . . I’ll go spray the fungicide on the peas (they have rust!). Nope . . no power means no water and it’s cloudy so I knew the solar well wasn’t producing.

One of the things that surprised us about moving to Texas was that we can choose our electric company.  When we lived at the lake, we were able to check around and see who had the lowest prices along with a good reputation.  When we moved out here, we couldn’t choose our power company but everyone told us they were trying to pass legislation that rural customers could choose their power company.  It must have passed because the lineman told us that next May, we’ll have to choose a new provider.  Sharyland will still own and maintain the lines but they will not be a provider.  Darn, I may miss those frowny faces!  It was definitely quite a bit less expensive when we were able to choose our provider (competition does that) so I am looking forward to paying less for electricity starting next summer.