We had a dog bed and I don’t know why we quit using it but we did. Instead of throwing it out, Vince put it out in one of the spots where Cat sleeps, thinking maybe she’d like it but we never saw her in it. When Vince would see her sleeping on the rocks, or on a piece of cardboard . . anywhere she seemed to be making a habit of sleeping, he’d move that dog bed over to see if she wanted to sleep in it. She never showed any interest in the bed.

Last week, Vince put the bed up on a bale of straw by where Cat’s heated house and heating pad are located. All of a sudden, she took to it and she rarely gets out of the bed. 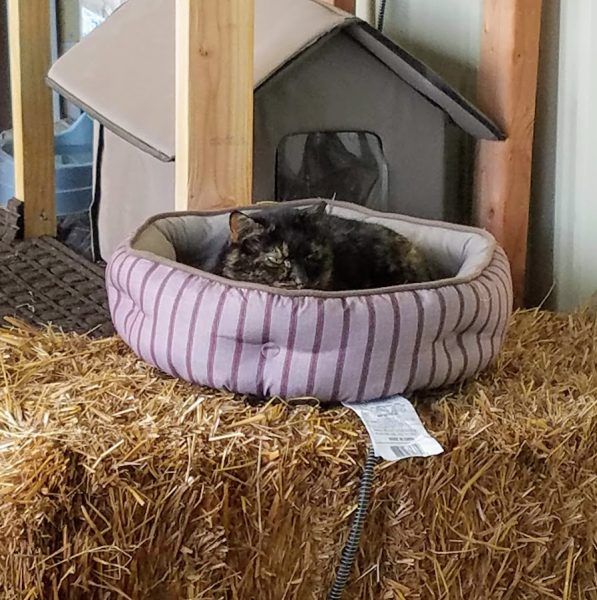 Cat in Her Bed

She seems to love it. She’s such a cat! She will close her eyes and pretend we aren’t there so long as we don’t get too close. I think she thinks by closing her eyes, she can’t see us so we can’t see her.

She still loves Vince and begs for more attention from him . . and won’t let me bet her and won’t come hear me. I keep reminding her that I’m the one who wanted to keep her and I’m the one who spent hours and hours for months and months trying to make friends with her but . . nope, she’s Vince’s girl now.