Dinner didn’t turn out quite like we had planned. Vince and I had a meeting in town and ran by the store for a couple of things. I mostly needed potatoes for baking, okra and green onions for my gumbo. Vince was running around looking for bargains and he found a package of steak that was marked down and he said “Want to grill steaks tonight?” That sounded good so I grabbed extra potatoes for baking. We came home and I made the beans, scrubbed the potatoes and got them in the oven and he got the grill going.

When I opened the package of steaks, they didn’t smell good at all. The grocery store had put the sale sticker on top of the date but when I peeled back the sticker, the date was 12/8. I actually couldn’t tell if it was “sell by” or “use by” but in any event, it was six days ago! I was pretty unhappy with the grocery store since we had just bought the meat. I called them and the manager said they weren’t supposed to sell meat past the date on the package. He was very apologetic, even offered to bring more steaks to our house. I told him that wasn’t necessary. We will get our money back when we go back to town and I hope they do better at checking dates and not selling meat that old. In the least, they need to not put stickers on top of the date! We put the meat in the trap. Maybe it will serve some purpose. 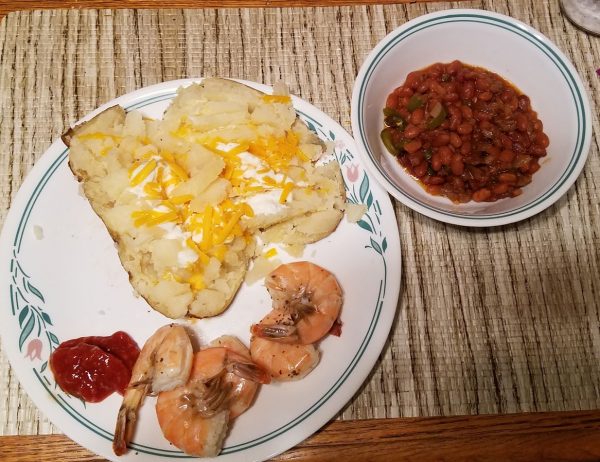 We had two packages of shrimp I was going to use for shrimp salad tomorrow so I boiled those, we had the baked potatoes and the beans. It was a yummy meal . . probably much better than steak anyway.