Not everyone wants a freeze dryer. Not everyone can even figure out why anyone would want a freeze dryer. I understand that. I am not trying to sell anyone on the idea that you need one. When I post about things in and out of the freeze dryer, it’s (1) Because I love sharing what I’m doing; (2) Some people do want them and want to see EVERYTHING that can be done with one and (3) I want to document what I’m doing in case I want to go back and look at it. For instance, I was guessing at how much sweet potato pie filling to put into the jars. I went with 7 oz. Next time, I’ll go with 8.5 oz.

Depending on what you’re putting up, they can be a lot of work. When I first finished the 20 jars of pie filling, I said “I will NEVER do this again” but I will. In fact, I told Vince if he sees sweet potatoes on sale for less than 20¢ per pound, buy 25 pounds.

You may remember that I made a little sweet potato pie with about 3.5 oz. of powdered filling that was left over after all the jars were filled. 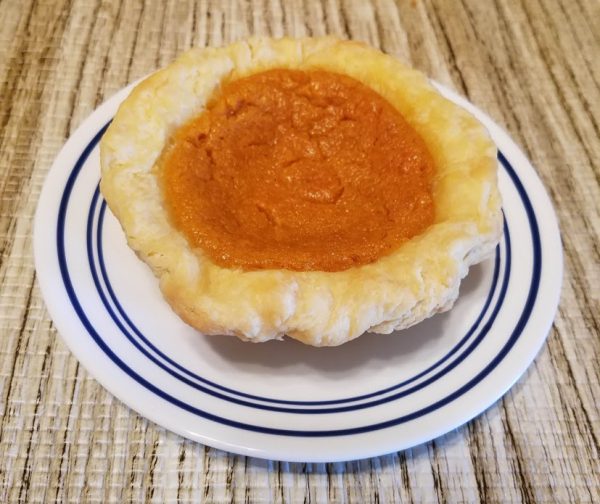 It was so good and at least three times a week, Vince asks when we’re going to have another sweet potato pie. I needed a smaller pie pan because there isn’t enough filling in one jar to fill a 9″ pie pan. Even a pie made in an 8″ pan would look skimpy. I looked at 6″ pans on Amazon and they were either more than I wanted to pay or they had bad ratings. I thought . . I can make a pie in a cast iron skillet. That should work. I was able to get a 6″ skillet for about $9. That will last way longer than a glass or metal pie pan and a skillet is so useful. 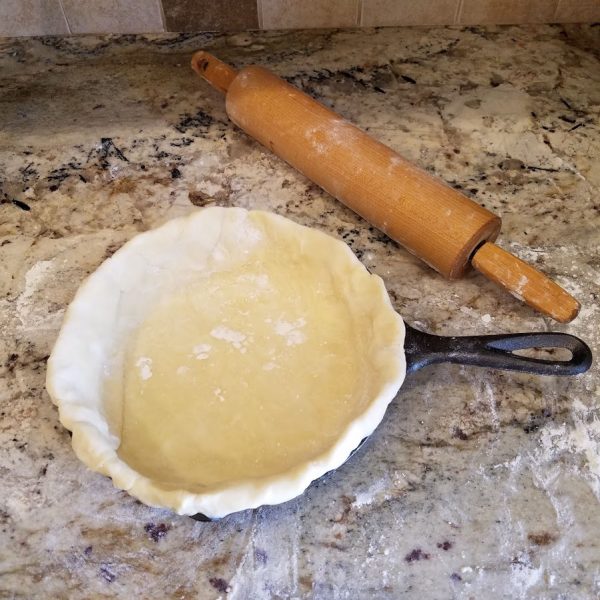 Then I got to thinking . . why not use a skillet every time I make a pie? I love that it has a handle. I always put my pies on a cookie sheet because by the time I put foil over the edges, if I pick the pie pan up, the foil either falls into the filling or off the pie completely. 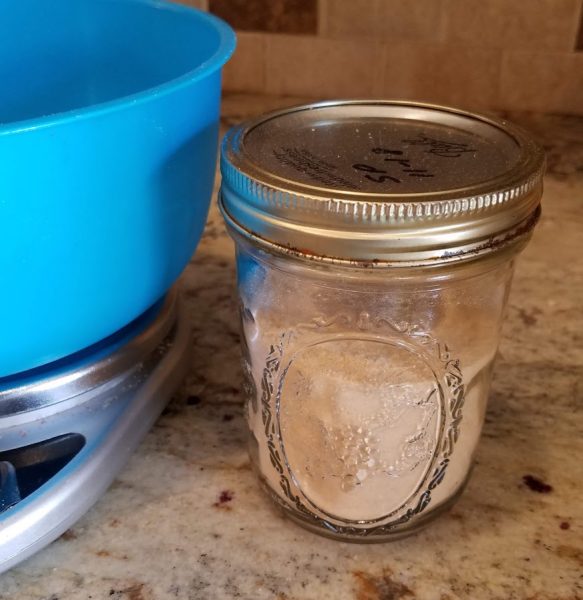 I grabbed a jar of sweet potato pie filling. Only 19 more left.  🙁 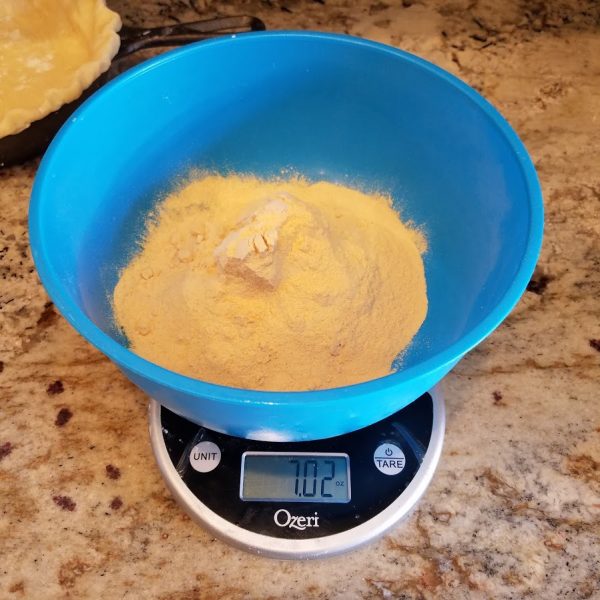 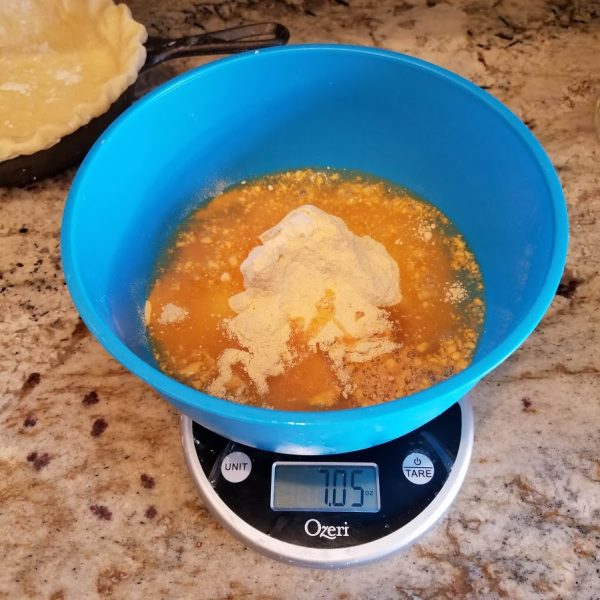 I added 7.05 oz. of water. It’s 1:1 water to powder. I love how it goes back to the color of sweet potatoes as soon as the water hits it. 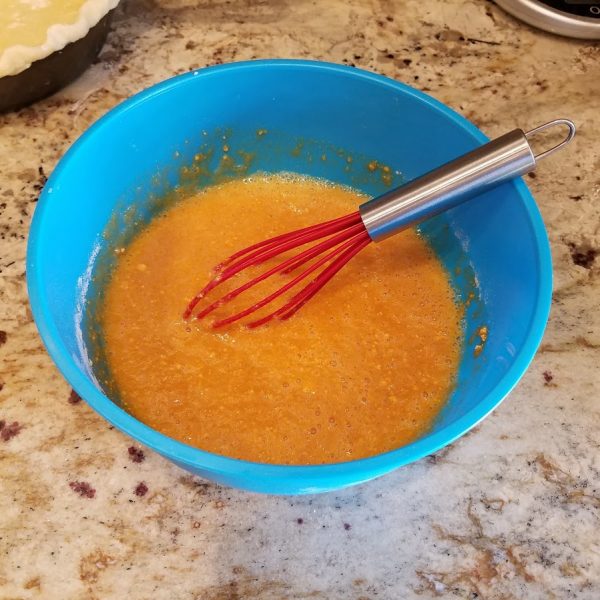 At first, it’s a bit grainy and clumpy looking but I let it sit just a minute, really just while I melted the butter, and it was smooth as could be. 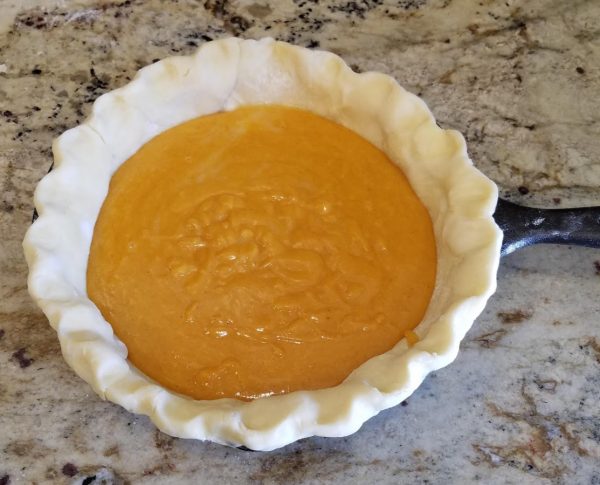 Because the skillet is deeper than a pie pan, I could have poured more filling into the crust but this amount will be just fine for us. 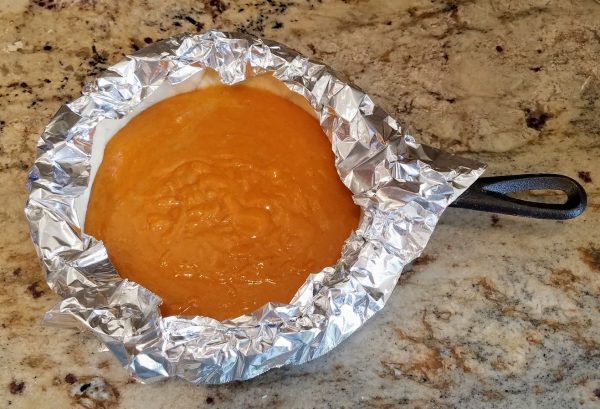 With the filling being lower in the crust, I was able to put foil over the edges without it touching the filling. That’s good. I do have the covers I can put over the edges but foil is quicker and easier than getting those things out and washing them.

Tonight, we’ll have sweet potato pie after it cools down! And it was hardly any work at all!