This is probably the end to a long, drawn out story. I always called my Samsung 10″ tablet “The Green Tablet” because it had a green case and Addie called it “The Green Tablet”. She loved that tablet and I did too. Through the years, I’ve had full size iPads, mini iPads, small Samsung Android tablets, Kindle Fire tablets but that “green tablet” was by far my very favorite.

When I would get to Missouri, almost the first thing Addie would say to me was “Did you bring your green tablet?”

Within the past year or so, it wouldn’t hold a charge. If I charged it in the morning and used it just a little, it was dead by bedtime. I was able to use it with it plugged in. Vince decided . . maybe three months ago . . that he would change the battery. I was apprehensive but he was certain it wouldn’t be a problem. When I was walking out the door to go do something, he said “Do you have anything to say?” and I said “Green tablet . . I’ll love you forever!”

Something went wrong and the green tablet has not worked again. He’s ordered more parts for it and has probably spent way more than it’s worth at this point. Yesterday, a few more parts came in. 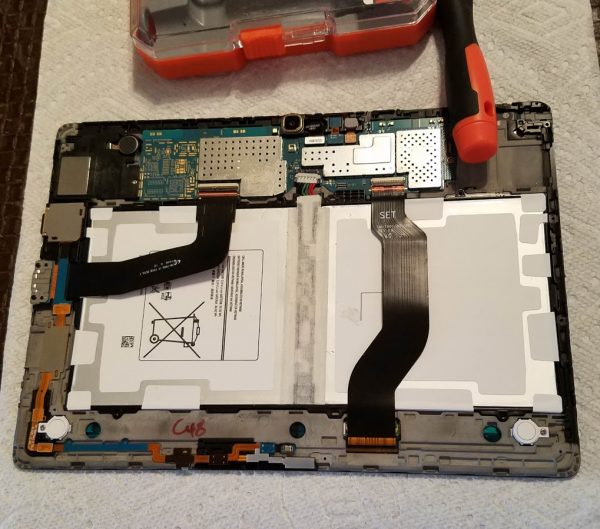 Nothing fixes it. Today he said “I give up! I’ve done all I know to do.” I said “Good, let’s toss it and be done!” You know that won’t happen. He really feels bad that he’s ruined the tablet I loved but I know he didn’t do it intentionally and . . it’s just a tablet.

The newest model of the Tab S (Which is what the green one was), is a Tab S4, which, in my opinion, is outrageously expensive, so we went with the S3. I believe the green tablet had 16 GB of memory and, when Addie was putting her stuff on it, I was always having to take things off. The new one has 32 GB of memory so I’ll be happy with that but I would have been happier if my old tablet had lasted forever . . which none of them will.

I asked Vince to find a green case for it it but he couldn’t find a lime green case so this one will have to be known as “the purple tablet” with its purple case. I’ll be really happy to have an Android tablet again and the iPad can go back to being only for Knit Companion.