Why do I let him talk me into these things?  🙂

Since we’re not going to have Thanksgiving at home, we decided to buy a turkey . . I asked for a small one; he bought a 22 pound turkey! Friday we were going to cook our turkey. I’m making cornbread dressing and giblet gravy to take so I was going to make extra and have it Friday with our turkey and then we’d have the carcass for turkey bone soup.

I needed to make more food to freeze dry for Rita and I started thinking . . Butterball turkeys are .79/pound. I pay almost $4/pound for ground turkey for Rita’s food. I could buy a turkey for .79/pound, boil it, take the meat off the bone, chop or grind it, have the broth for whatever I want to use it for and then freeze the meat in one pound packages for Rita. I know, even with the work involved, it would come out to way less than $4/pound. I mentioned it to Vince.  He thought it was a great idea. He would buy another turkey . . this time it’s smaller – 21 pounds.

We had the turkey defrosting so I could boil it, I’m getting near the end of Rita’s food. This morning I told him that since I had been processing the cranberries, I wasn’t going to to cook the roast that was scheduled for today. We would have beans, sausage and rice tonight, then gumbo tomorrow and then I would freeze the leftovers for him to have while I’m gone. OK . . sounded good to him. 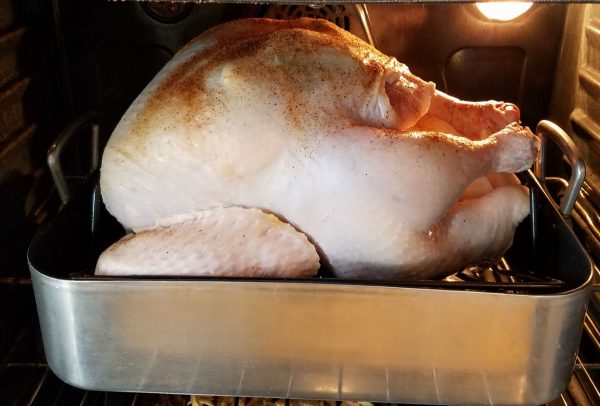 Not an hour later he came in and said “Let’s roast that turkey. We can have that tonight! Then you can chop the leftovers for Rita’s food!” That wasn’t the plan but if that’s what he wanted . . that’s what we would do.

He was helping me clean it up and he said “You are going to make giblet gravy, right.” Sure.

Later he came in and said “How hard would it be to make cornbread dressing?” I said “I guess next you’re going to ask for sweet potato casserole too?” “Yep, I mean no . . I wasn’t going to ask but I was thinking it would be good.”

I’m wondering, does this mean we’re having turkey and dressing for the next three or four days, skip a few days, then have it for four or five days again? I suppose I don’t mind . . leftovers means more knitting time.