Time flew by this past week. I had so many big plans but only a few were completed. Ah but such is the life of a retired person. If it doesn’t get done today, there is always tomorrow and no one, well almost no one, is looking over your shoulder asking you why things aren’t getting done.

There were a few “interventions”, this week, not in my control, which impacted my planned workflow. That’s all I’ll say about that because someone might be listening and have a contrary very vocal opinion. As I get older, I “seem” to be learning more and more about the importance of harmony. The basis of harmony at our house (and I’m sure at yours too), is a little different than how it’s defined in the dictionary, i.e. the balance seems a little skewed. The other complication is that targets are always moving and quickly at that. Most requests (Judy calls them reminders which, in her mind, transfers the responsibility from her to me) seem to take place after I have already settled in for the night, I’m comfy in my chair and I’m engaged in something I want to do. Then I hear those dreaded words, “Vince, did you….:.”  Now mind you this is usually referring to something that was mentioned once in a passing conversation over a month ago. And I respond, “Does it have to be done now?” And Judy responds, “Well it would nice if you could!” What compounds the request is that it is usually almost dark outside and I have to do 15 other things first before I can accomplish the task being mentioned.  Turn the tables. If I asked Judy if she did something, the response it usually just, “No, I’m knitting”! Oh well..HARMONY!

I am sure you have read in the past that one of Judy’s greatest concerns was what I will do to keep busy (meaning out of her hair) after I retired. I have never had that concern because I have so many interests. It seems I have a hyperlinked mind. One thing leads to another, and that to another, and before I know it, I’m am thinking or working on somethings totally different from where I started. Anyway, back to me having something to do. You know I have the 3D printer bug at the moment and, unfortunately, that has overtaken the mushroom bug a bit. Also, with the constantly changing weather we are experiencing, it’s much easier to play in the comforts of home rather than face the cold damp elements being presented by nature.  Good excuse! Well to make a long story short, I ended up getting another 3D printer because it was more challenging than my previous two. I actually had to put this one together from many, many pieces and program the logic to make it work. Why would I do this you may be asking? It’s because I want to better understand how they work so I can make modifications to improve the printer and interface. It also ties in with my desire to get better with electronics and programming. 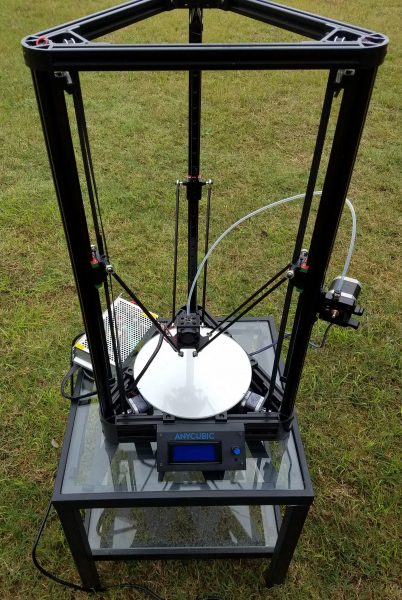 So I spent the majority of “my” free time assembling the printer and now I am working out the programming.  This is like learning a new language and it takes research and time. That’s fun to me and I think I am out of Judy’s hair as long as I stop talking to myself!

Just so you know, I did have a few challenges out in the elements this week.  I didn’t want you to think I was just cozy in the house.

First, garlic had to be planted.  We were waiting on the ground to dry and we had to get it in before the next scheduled rain, which was on Thursday.  After another tilling and smoothing of the planting area, I layed out nice straight rows with stacks and string. Upon Judy’s inspection of the area she stated, “I don’t think you have enough rows!  We will need to put more rows between rows.” Based on how many cloves she had and the planting directions, that couldn’t be. But in my quest for harmony, I said,”Well if you think so Dear”. After planting a few rows, Judy decided maybe we do have enough rows.  In fact, we had too many. I say nothing (thinking is ok) and just smile. Finally, we covered the whole area in tarps so the rain wouldn’t wash away all our hard work. The rain didn’t amount to much so on Saturday it was uncovered.

My next challenge occured when I went to turn on one of the outside faucets and the handle broke off in my hand. After it happened, I went inside and showed it to Judy and said, “Look Judy, with age, it got brittle just like us and it needs to be replaced”.  Ooops I might have phrased that wrong but you get the jist. Anyway, when I tried to get the screw out to change the handle, I broke off the tip of my screw driver. The screw wouldn’t budge. I couldn’t just change the whole faucet because it’s base goes into the stone of the house.  The only option I had left was to remove the whole stem (the part that goes up and down when you turn the handle). I put my wrench on the fitting, but it wouldn’t move. Brass, especially old brass, is weak and can crack easily if one puts too much muscle on the wrench. I learned that lesson the hard way during a prior plumbing job.  Next, I heated the faucet with a torch. The idea is that the outside part will expand so that the joint become loose. Nope, not this time. Next, I squirted the joint with penetrating oil but it still wouldn’t budge. Looking at the faucet, I realize that if I cut the remaining part of the handle off with a hack saw, I can get better leverage on the fitting with a deep well socket.  The faucet is about 200 yds from my shop, so after what seems like the 20th trip back and forth, I finally got the right combination of tools together and BINGO, off comes the fitting. I had already made the trip to the plumbing store to get the replacement part and, in a matter of minutes, well discounting all the initial problems, it was fixed. 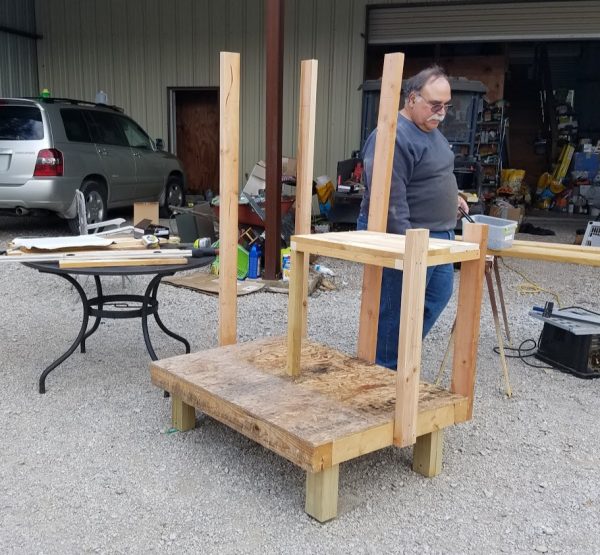 Finally, I looked at the college football schedule for Saturday.  I couldn’t believe it. Both my teams were playing night games which gives me the whole day, and, to Judy’s delight, I once again can interact with mother nature.  I decided the most pressing thing for the day was to get Cat’s warm spot for winter built. The ordered heated pad had arrived so I began planning how to build the platform (cat tree) on which it can sit.  Looking for building materials on hand and being in “no spending mode”, I decided to repurpose some wooden pallets and 2x4s. Cat doesn’t like change so I hope this works but, if it doesn’t, I don’t have too much invested.  I will spare you all the details but I am sharing a picture of the uncompleted Cat tree to show you the build is going well. Today I will put the finishing touches on the Cat tree and share a picture of the finished project during the week. Time will tell if Cat adapts or if I have to resort to plan II. I did get hissed at Saturday night because I moved her tree while working on it.

Anyway, that about it for this week’s harmonic adventures from PFTR.