No, not on the ground but that’s the name of a new knitting pattern. Helen Stewart of Curious Handmade designs such lovely shawls and wraps. Some of her patterns are my favorites of all the shawls I’ve made. She does Knitvent . . her take on the Advent knitting. This is the first year I’ve purchased her Knitvent series. The first one is called Dust of Snow and it came out this morning. Many dyers will dye up special “Advent” packages which contain 25 mini-skeins. 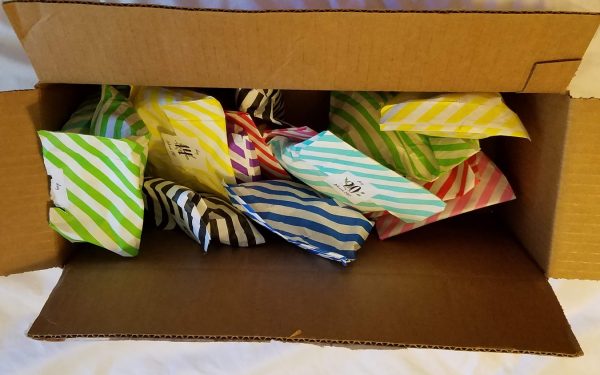 The skeins are often wrapped and numbered. Last year I bought two kits to make Ambah O’Brien’s ADVENTurous Wrap. I love it and I want to finish it. I’m about halfway done with it.

I also bought Sunshine Yarn’s kit for the same pattern. I wasn’t sure which one I would like best but in the end, I didn’t want to spoil the surprise so I started with Miss Babs’ kit and never opened the Sunshine Yarn kit. 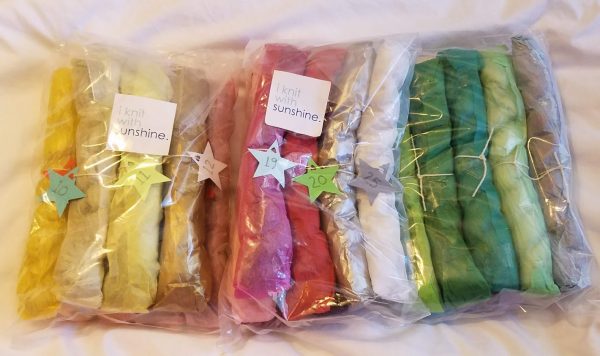 When I saw that the first Knitvent pattern this year called for an Advent kit, I knew I had one that would work so I dug it out and that’s what I’m using.

The pattern recommends holding the yarn together with Shibui’s Silk Cloud and it calls for four skeins. By the time I decided to do this, just about every skein of Silk Cloud in the world had been purchased. Not one of the four places where I purchase most of my yarn had four skeins of a neutral colored Silk Cloud. I began googling, looking for any shop anywhere that might have four skeins. I found one that had four skeins of Ash, which is a neutral gray so I purchased it. Then I saw that they “usually” ship within 5 days. It’s been well over 5 days and it hasn’t shipped so I contacted them and she said they were waiting for more to arrive any day because the four skeins were not the same dye lot and obviously different colors. I appreciate that. I had two skeins of Fog so I ordered two more skeins from another shop but they wrote me and said there was a mixup and they actually didn’t have any skeins of Fog. I found another shop that had four skeins of Ivory. It isn’t the color I had hoped to use but I ordered it and hopefully it will be here Monday.

As you might imagine, I have projects that I can work on between now and Monday!  🙂