Thank you very much for those of you who commented on Dr. Tsivoglou. He was a great man and he is greatly missed.

Now for the “fun” mentor.  I have always liked wood. The way it looks, feels, smells, its varying natural figure, textures and, of course, working with it. As a kid, growing up in St. Petersburg FL, I remember this older fellow down the road who had the most amazing woodshop behind his house. Tools, jigs, projects, and of course WOOD everywhere. Oh, and that wonderful smell.  My only regret, thinking back, is that I didn’t take advantage of spending time with this man.

There is a Georgia State Park named Unicoi. The name Unicoi comes from the Cherokee word unega, which means white. It refers to the low-lying clouds that often drape the Southern Appalachian mountains, which is where Unicoi is located.  It is one of my favorite areas to spend time. This is also where there headwaters of the Chattahoochee River originate, providing one of the main water sources to the City of Atlanta.  This link will take you to the Park website so you can learn a bit about this wonderful place.

From time to time, the Park would host artisans and, during one of my visits, I found a woodturner demonstrating his craft. I think I stood there for hours watching that fellow turn the most interesting objects on his lathe. As we struck up a conversation, I expressed my interest in learning more about the art.  The turner asked me where I lived and I replied Athens, Georgia.

He smiled and said, well you have one of the best in the world living there and his name is Bill Hug. Boy was I excited. I couldn’t wait to get home and look up Mr. Hug.

After returning home, I did a quick search of the phone book (before google I believe) and there was his name. I called the listed number and a man answered. I introduced myself, told him he was recommended to me by a turner I met at Unicoi and before I could say anything else, he blurted out, “I DON’T TAKE STUDENTS”.  My bubble was busted! All my excitement and hopes were washed away in the couple of seconds it took for him to make his point very clear. I was speechless (something unknown to the Laquidara DNA). Like a boxer, he then followed up the first blow with, “Will there be anything else”. I was then down for the count!  I’m not sure if I even had a reply but I do know the conversation ended abruptly.

Not being someone who gives up easily, I started researching Mr. Hug, or, should I say Dr. Hug. I found out that he was a retired professor from the University of Georgia, taught at some other Universities and was an expert in Industrial Design. For those of you that know of the intense rivalry between anything associated with the University of Georgia and Georgia Tech, you might have thought, this won’t work.  Well, in the case of WOODturning, I was able to put that bias behind me. In the back of my mind, I must have thought, NOT AGAIN, I am going to get me a wood mentor this time.

I found out Dr. Hug turned beautiful pieces of art and exhibited them in many art galleries. Now I understood why he didn’t need a student, especially one he know nothing about. Sometime, weeks later, I found the courage to again contact Dr. Hug.  I told him I understood his position, but I didn’t want to be a student. All I wanted was the opportunity to spend a little time with him, see some of his work and ask a few questions, nothing more.  After a long silence, well it seemed long at the time, he responded, “alright”. That was it, no details were provided. I thought to myself, do I ask the when and where questions now or do I not push my luck and call back for the details?  I called back.

In our third conversation, Dr. Hug provided the details for the visit. It would take place during the mid part of a day, not on a weekend, be at his studio and it would last no more than 15 minutes. I wasn’t going to push my luck so I agreed to the terms as outlined. I decided to make my visit during my lunch break since his studio was not far from where I worked. His studio was in the basement of his house. So upon arrival, I went to the front door, range the bell and was greeted ( I guess you could call that a greeting) by a distinguished looking man with little expression on his face.  He invited me in and we stood in his foyer for what seemed like an eternity. Finally, he escorted to the basement or should I say the basement of amazement! See the link below for pictures of Dr. Hug and some of his work.

In one room was his workshop. All the tool and more tools! Then there was the wood storage area.  Wood in all colors, shapes and sizes. It was at this point that I realized I was clueless about wood. There was his staging area where he kept pieces in progress. And finally his gallery.  I couldn’t believe me eyes.  I thought the wood was amazing, the finished pieces were beyond belief. So intricate, so smooth, such patterns and combinations of colors. I thought I had died and gone to wood heaven. (This article in Wood Magazine gives you a glimpse of some of Dr. Hug’s work.) Dr. Hug cataloged every piece he made with: a photograph,  the type of wood from which is was made, when it was made, significant facts about the piece and to whom it was sold. I know I violated my 15 minute time allocation but Dr. Hug didn’t seem to mind too much.  At the conclusion of my visit I thanked him and asked if he minded if I followed at a later date with more questions. He thought for a moment and replied that it would be OK.

The rest is history, I gradually made more and more visits to his studio. The interactions and relationship grew from conversations, to him demonstrating techniques, to me actually getting to work on his equipment. We even made a couple of trips together to buy wood, one to South Carolina and one to Atlanta. I believe at one point, I was visiting at least 3 days a week in his studio. Of course, I never exceeded my one hour lunch break. 🙂 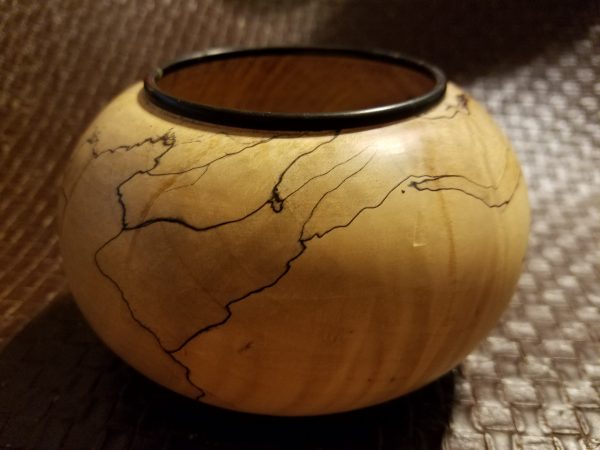 I bought my own equipment and Dr. Hug would visit my garage (not a studio) and give me pointers. The photo you see is the first significant piece I turned with Dr. Hug’s help. It is turned from spalted figured maple with an ebony rim added to highlight the spalting. I started producing many different woodturned objects and sold them at craft fairs and various craft shops. Even the gift shop at Unico carried some of my pieces until I moved from Georgia. 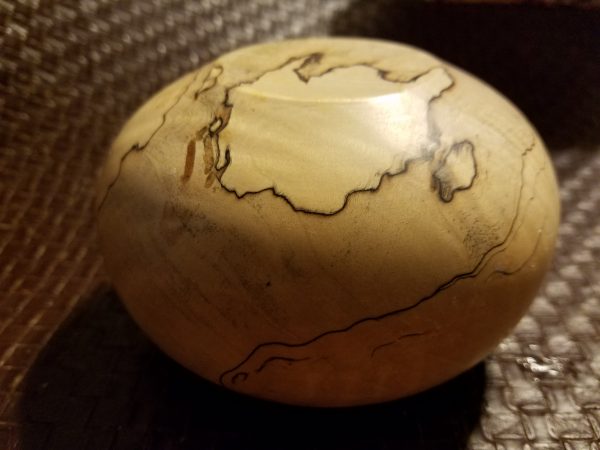 We parted ways when he moved to Nevada to be closer to his children and I changed jobs and moved to Mississippi.  Over time, the written and voice contacts became less and less as we both drifted off into other parts of our lives. 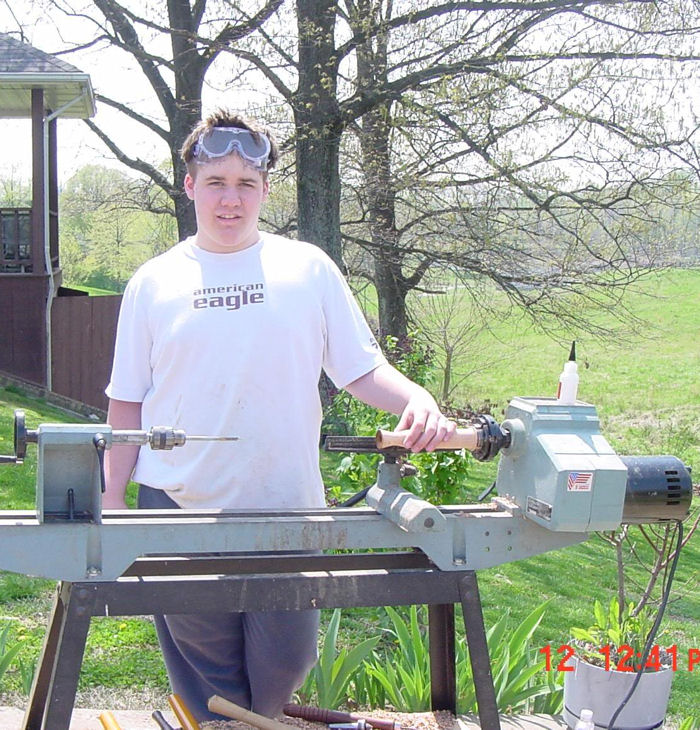 I continued to turn wood in Kentucky (move after Mississippi) and even started to teach Chad when he was old enough. Included here is a picture of Chad hard at work. 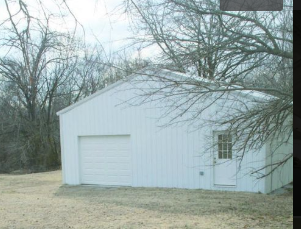 Workshop at Former Home in MO

Then we moved to Missouri. I didn’t have a shop at first, so the turning ended. About the time I finally was able to acquire some land behind our house and enclose an existing building to make a shop, we moved to Texas. Judy will say, if you really wanted to do it, you would have found a way to do it sooner. She’s right (oh my her head just got bigger 🙂 But you know, while I love wood and woodturning, I believe what I really loved the most were my many and growing interactions with Dr. Hug. During one of our latter visits, Bill confided in me that he had lost some of the zest for making art, but it was our relationship that had reignited his spark.  We came a long way from our first interaction.

Chad has recently gotten the woodturning bug and it seems youtube is his current mentor.  Dr. Hug learned the art from his father and his father learned from this father before him. They passed it down through their Swiss heritage.  Dr. Hug informed me that his son had no interest in that art and that he only taught the craft to me and one other fellow who now does it for a living. Who knows, maybe down the road, when Judy finds “that” house, maybe another old dog will rekindle a spark, blow the dust off his tools too and let another generation see “how the Swiss did it”, but with an Italian flair!

Here’s Dr. Hugs Obituary in the event anyone cares to read it:  https://obits.reviewjournal.com/obituaries/lvrj/obituary.aspx?page=lifestory&pid=161031878