Facebook told me yesterday that it was four years since Rita arrived at our house. 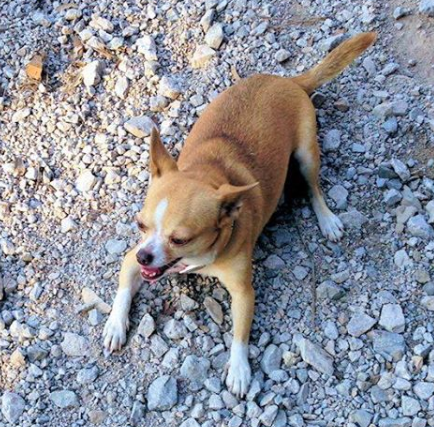 We love her and are so glad to have her but it’s been a rough four years. I worried that Speck, who was already old and grumpy, wouldn’t put up with her. He was fine with her. Rita’s bathroom manners were the worst of any dog I’ve ever had. I remember after she had been here about a year, my friend being over and I said “I think she’s finally not peeing in the house” and then my friend said “Oops . . what’s that?” Yep, she had peed on the rug. Thank goodness we have no carpet and mostly cheap, Walmart rugs and we’ve gone through quite a few of those since Rita’s arrival. At least the first year, almost every time I looked at her, I said “I know why you got dumped!”

She was living in the woods, off acorns, when she showed up here. I don’t know how long she had been in the woods but Vince had to catch her in a trap (like the one the cat was in yesterday) because she would not come to us. We found several stashes of acorns that she had tucked away . . under the RTV, in a corner behind the wood pile, etc. For the longest time, when we’d go out with her, all she wanted to do was find and eat acorns.

Oh . . and her first trip in the car . . I had never had a dog that had to have his glands expressed. We went to get her fitted for a harness and then Vince went to Kroger and left Rita and me in the car. She was nervous and she let loose. I had the car door open, trying not to die from the stink. Some old man walked by, saw Rita and came over to talk to us. Poor guy. No telling what he thought because that smell was the worst ever. Vince got back to the car and . . you don’t even want to know what he said but let’s just say we had a LONG ride home with all the windows open. Since then, we’ve been sure to have her glands expressed regularly.

Seems like the first couple years she was here, we had quite a few thunderstorms during the night. She was terrified of thunder and we had several sleepless nights. We tried everything . . calming drops, Thundershirt . . nothing seemed to help with her fear of storms. She seems to have grown out of that fear a bit. It probably helps that we haven’t had much thunder in the past couple of years.

She had not been spayed so we had that done. Then, in July, 2017, she was diagnosed with glaucoma and had already lost her eyesight by the time we found a vet that accurately diagnosed her eye problems. We have to go to Abilene monthly for an eye pressure check, we have two drops that go in her eyes four or five times a day.

We’re lucky that she’s not the typical chihuahua. She loves everyone and I’ve never heard her growl or snarl at anyone. She doesn’t bark much

But, we love her and without old Speck around, our life kinda revolves around Rita. Every day, I tell her “Thanks for choosing our house to be your home.” We definitely would not have picked a chihuahua but what do you do when one picks you?