Which came first? Breakfast or the eggs?

Thursday we went to town and I took all the eggs I had to a friend, thinking the chickens would lay more because we hadn’t checked for eggs yet. There was a time when I was getting two dozen eggs per day. During the hottest part of the summer, we were getting just one or two eggs per day but lately, we’ve been getting five to seven eggs per day.

So . . we came home and had zero eggs in the house. When I went out to feed the chickens and gather eggs . . no eggs! Not one. That meant, we weren’t going to have eggs for breakfast on Friday. I figured I could make smoothies or open a jar of freeze dried eggs and it would be fine.

Vince got up wanting fried eggs. Hmm . . no can do! I explained to him that we have no eggs. WHAT? It seems like forever when we haven’t had dozens of eggs around but we had none. 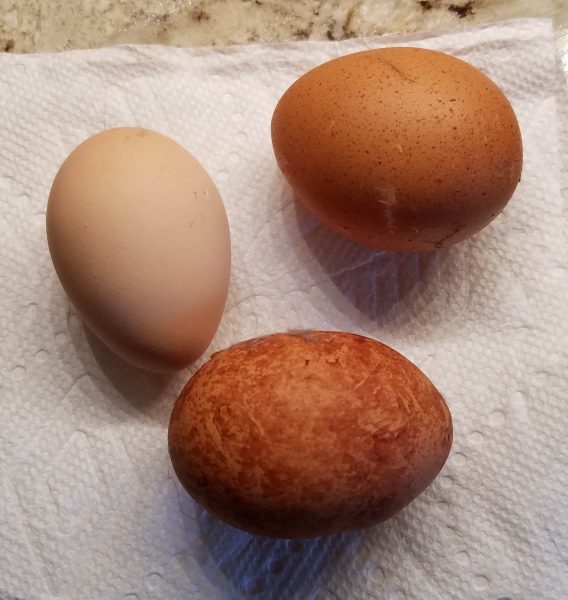 Vince said “How long before you think they’ll lay some eggs?” I had no idea but it seemed kinda crazy to be sitting here waiting for the chickens to lay eggs so we could have breakfast. I said “I can fix smoothies!” Nope, he wanted eggs. I said “I can scramble some freeze dried eggs!” Nope, he wanted fried eggs. So . . we waited. He went out to the coop and there was one egg. About half an hour later he went out and there were two more eggs. Three eggs – two for him and one for me.

Darn those chickens. They need to pick it up a bit and start laying more eggs. In their defense, two were sitting on nests, there are probably four of them that are molting and they don’t lay when they’re molting. That leave about 10 more hens . . there’s no reason I shouldn’t be getting at least six eggs per day . . but I’m not! These hens aren’t even two years old yet so they should still be laying. I’m hoping it’s just taking them a bit of time to get over that horrible summer but . . whatever the reason, there’s not much I can do about it.