The Undulance sock was a big hit on Facebook and there were a lot of questions. Instead of trying to reply to the comments on FB, I’m going to make a blog post and link it there. Most of this I’ve said in previous blog posts but everything I have to say about this pattern will now be in one spot. 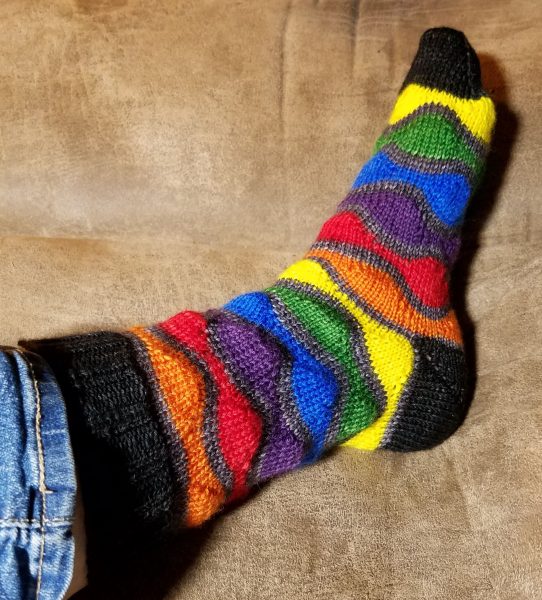 The pattern is Undulance by Suzanne Bryan. Thank goodness today isn’t the day I wasn’t going to mention her name. I can resume my love fest with Suzanne and her knitting knowledge and her willingness to share and educate.

As I’ve said before, the hardest part about this pattern is obtaining the pattern. As of now, you can only get it by being a member of The Knitting Guild Association. It’s in the Spring, 2015 issue. Membership dues are $25/year. To me, it’s worth it. There are 20+ magazine issues online and every one of those has quite a few patterns.

The pattern uses short rows to create the shape and takes advantage of the stripes in yarn.

The yarn makes this pattern shine. Suzanne used String Theory Continuum, and that’s what I used. Her color is Cassiopeia. My color is Prism. With the Cassiopeia, the black stripe has little white dots in it and I love that. With my color, there’s a solid gray stripe where hers is black/white.

I have not seen Cassiopeia in a very long time. I’m not even sure that it is still being dyed. The label shown below is for Bumblee Jasper (not the color I used) but you can see the striping sequence. This is what you’re looking for to make Undulance look like the pattern. 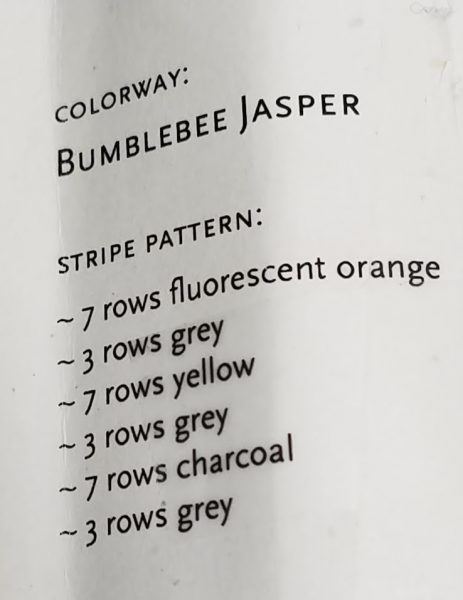 If you want your stripes to look somewhat like the pattern, you must:

There may be other places that have the String Theory yarn. At least at ESK, you can’t see the striping sequence. The yarn Suzanne used has four colored stripes (pink, aqua, red, and orange) with the black/white in between. The yarn I used has six stripes (orange, red, purple, blue, green and yellow – rainbow colors!) so it doesn’t matter how many colors there are – just so you have the 7 row colored stripe and 3 row dividing stripe.

Since we cannot see the tag that tells the stripe sequence, unless you want to order 5 or 6 skeins, hoping one has the sequence you need, I suggest you go to Ravelry and look up the yarn you’re wanting to use, find socks someone else has made and that will give you a good idea of the striping sequence.

String Theory does have some of their yarns listed and they do include the striping sequence but the web page is not complete and seems to be outdated. That’s ok. I’d rather them dye more yarn than spend time messing with the website.

I’m fairly certain there are other yarns that would work. The pattern was written specifically for the String Theory yarn so  . . experiment if you wish. If it helps anyone – the gray portion is about 95″ long and that’s 3 rounds.. The colored stripes are about 200″ and they make 7 rounds.

For me, it was a very fun knit. I didn’t want to stop knitting. It was interesting and exciting to see the stripes develop. I can’t wait to cast on the second sock and there may be another pair of these on my needles soon.