You’ve probably figured out by now that I love anything that blooms. Through the years, when we’ve moved into a house, most of the landscaping shrubs go. My motto has been: If it doesn’t bloom or we can’t eat it, we don’t keep it!

Seriously, if I’m going to water and weed, I want flowers and/or food.

Everywhere we’ve lived, I’ve planted rosemary because I love it. It survives but it never gets huge. Here, it’s going to be a shade tree soon at the rate it’s growing. 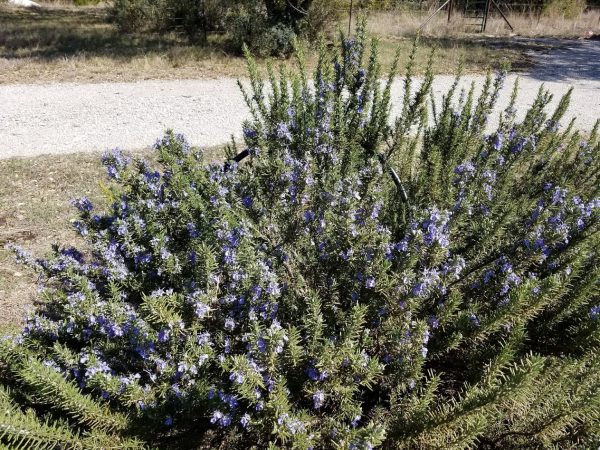 When I planted these two plants, I had no idea how large they would grow. They’re almost to my shoulders and they are huge. They’re growing into a couple of fig trees and I fear I’m going to lose my fig trees in the middle of the rosemary trees.

With this winter being so cold and having quite a bit of ice and night temps down to 2 degrees a few nights, I wasn’t sure how my rosemary was going to do but . . it looks like it’s thriving. These are the most blooms I’ve ever had from rosemary. It’s so pretty and so fragrant.

I have a chicken that I was going to smoke but I’m wanting to stuff it full of rosemary and lemons and bake it but Vince isn’t a huge fan of rosemary so I suppose I’ll stick with my plan to smoke it.