Warning: There is a snake picture below!

This evening I was out doing my chores – spraying the tomatoes, watering the keyhole, checking the fruit trees, putting up the chickens .. I had on my rubber boots (no flip flops!) and I was being very careful . . listening for rattles, watching for movement. I looked down and . . what did I see? Yep, snakes — two, but they were dead.

Goodness . . I’m trying to type stuff so no one accidentally sees a snake picture . . getting it way down the page.

What happens is this plant landscaping “stuff” . . don’t know if they call it fencing or what, but the snakes try to crawl through it and get stuck and then they try to go a different direction and they get really stuck and .. they die. This landscape stuff was right at the edge of our yard, under the pipe fencing that separates the house from the ag land.

I’m wondering how many we’re going to see this year. Maybe I don’t want to know.  Last year, the entire year, we killed one snake – I killed a small rattlesnake in the garden. This year already we’ve killed 6, the 2 we just found dead and the 2 rattlesnakes the UPS guy saw . . that’s 10 already. 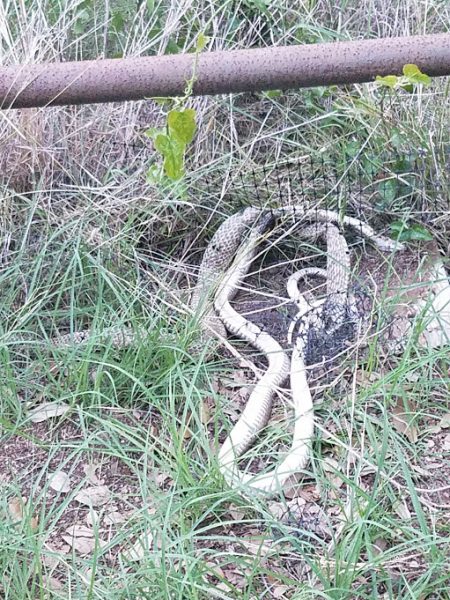 Those are two pretty good sized snakes. The sun has bleached them out a bit I think but they didn’t smell so they couldn’t have been there much more than 24 hours.

Sorry for those who think it’s gross . . it’s my life these days.