Vince saw something on TV last week about beef stroganoff and I knew he was going to be wanting me to fix some. Over the weekend, he asked if I could make beef stroganoff. The only beef I had in the freezer was a big roast and I didn’t want to take it out to thaw, and then have a huge pot of stroganoff that would last a week. The menu was already made and the food for the weekend was already defrosted.

I told him I could make it using canned venison. When people tell me they don’t like canned meat, I’m thinking they’ve never had good, home canned meat. It wouldn’t be good for things like BBQ chicken or grilled burgers but for a whole lot of things, it’s the best! I season it before canning it so it’s been immersed in good flavors and pressure cooked til it’s way tender. I love making enchiladas with chicken that was canned with the right spices.

Vince doesn’t mind hunting, dressing, or butchering the deer but when it comes to eating them . . he isn’t real fired up about that. I say . . if you’re going to kill it, we’re going to eat it.

So, when I asked him if he wanted me to make stroganoff with venison, it was an emphatic NO! I tried telling him he would never know it wasn’t beef! NO! I explained that I’d rather have venison any day – no hormones, no antibiotics, no feed lots. Still . . NO!

This morning I knew I was going to be busy and there’s not much quicker than opening a jar of canned venison, adding sliced mushrooms, sour cream and a few additional spices and having stroganoff ready to serve.

Vince came home and said “What’s for lunch?” I never tell him a lie (unless it involves  yarn purchases) but I don’t have to blurt out that it’s venison.

Vince: What’s for lunch?
Me: Stroganoff.
Vince: Venison, right?
Me: Yep!
Vince: You know I don’t like it.
Me: Just try it and if you don’t like it, I’ll heat up some leftovers. 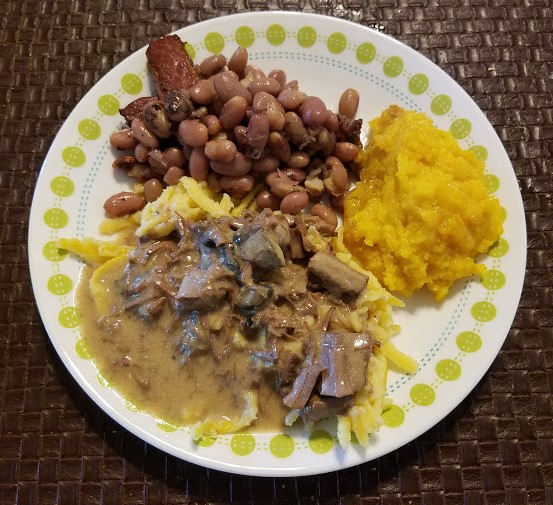 He took one bite and said “This is beef!” I said “No, it’s venison!” He kept saying “I know it’s beef!” and I was laughing because I knew he was going to like it .. he just had to get past that Bambi attitude.

After we finished lunch, we had this discussion:

Me: So, you’re ok with eating venison.
Vince: Yes. (But he always says that after he eats it and the next time I want to fix it, he says NO!)
Me: Was it as good as beef?
Vince: Yes, better!
Me: What made it better than beef?
Vince: It was free!
Me: No! Seriously, what did you think about it?
Vince: It was tender and tasty. What else do you want me to say?

Goodness, what’s a wife to do?