Last week, or maybe the week before .. sometime in the recent past, I saw a recipe for Chicken Tandoori at Pressure Cooking Today and I knew it was something I had to make.

The first part of the story is funny. I know to never sit a bag of groceries on the floor if it has anything in it that old Speck might get into. I always have the baggers put meat in plastic bags in case it leaks in the car but I forgot Vince was with me and he said “paper” and they put everything in paper. Not paying attention and bringing groceries in, I accidentally put the bag with the chicken thighs on the floor. When I came back in with another bag, Speck had that “Try to get it and die!” look on his face and a chicken thigh in his mouth. I was mostly afraid that Rita was going to see it and Speck would hurt her if she wanted a taste of it. I was hollering for Vince to come and help me. My first plan was to throw a bath towel over Speck’s head and try to grab him. I figured if I could pick him up, maybe he’d drop the chicken thigh. No . . I was going to lose a hand trying that.

Finally, I got the dust mop and kinda nudged him against the wall. He tried to attack the mop and in the process, dropped the chicken thigh and Vince was able to grab it. That’s how two fully grown adults take something away from a 12 pound dachshund!

Back to the recipe. 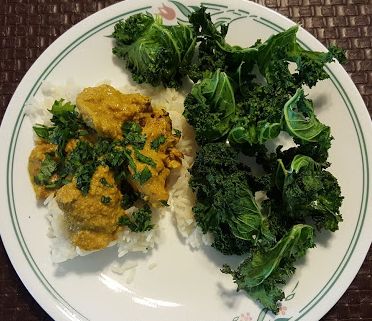 It was so easy and so totally delicious. The only changes I made were: 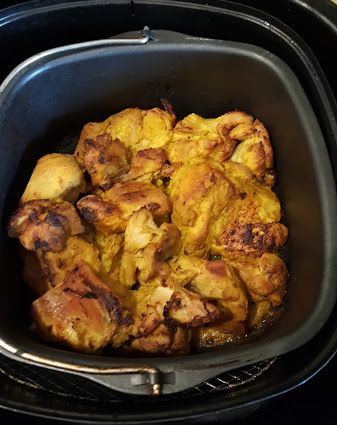 It’s a really easy recipe and very tasty. I used a whole jalapeno and it was pretty big and made the dish as hot as I’d want it. A little less hot would not have been bad but it was good. I also used homemade Greek yogurt.

This is another recipe we’ll definitely be having again.

And, the kale chips on the plate — also done in the air fryer.