The old Bernina 234 serger/0verlock was purchased at the same time as the Bernina 1230 and that was either in 1979 or 1980. The serger hasn’t had a lot of use but the 1230 has been worked so hard. Until a couple of weeks ago, I thought the serger was in the sewing room closet but then I saw it upstairs in the storage area over the shop. Immediately, I knew that was a potential problem because that means it’s been up there over 5 years. It gets miserably hot up there and there are lots of mice. 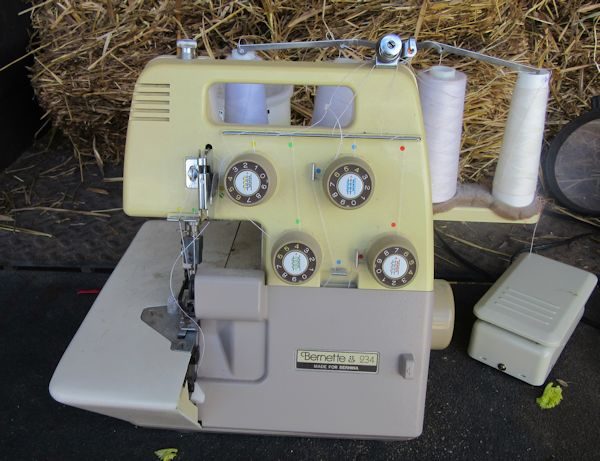 As I was carrying it downstairs, I kept hearing something dropping out. Deer corn! The mice had packed it full of deer corn. Before ever trying to clean it up, I got online and looked at prices for a new Bernina overlock and decided I’d do my best to clean it up and see if it works before investing in a new one. I told Vince . . this could cost you lots of money! He said “I can fix it! I can take guns apart and fix them . . you know I can fix a sewing machine!” Hmm . . not so sure about that.

The new sergers are pretty expensive but who knows if I’d use it much. Addie may decide she doesn’t like the clothes I make for her and that will be the end of my needing a serger. 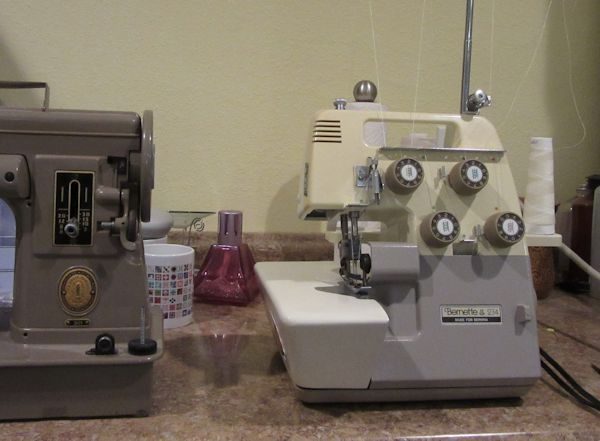 While it was outside, I scraped out all the deer corn, chicken crumbles and other things I chose not to scrutinize . . I sprayed it out with canned air, wiped everything down and oiled all the parts that needed oiling. The little cup thing that sits under it to catch the cuttings is somewhere in the sewing room. I come across it from time to time.

In 25 years of having this thing, I’ve never had to re-thread it all the way from square 1. I’ve always tied the new thread to the old thread and pulled it through like that. No way was I bringing the thread in that was on it so I cut it, pulled it all out and found some partial cones in the sewing room. There’s a handy color coded diagram inside the serger for how to thread it and I got it done except for one thread. For the “red” thread, it kinda shows it just going up and I could not figure out where it went after it was threaded through the last hole. No matter where I put it, it would sew just a little and that thread would break. I messed with it for probably 2 hours. I pulled all the threads out and started over . . just in case it was one of the other threads causing the “red” thread to break.

Finally, out of desperation, I went and got Vince and said “Would you please come look at it just in case I’m overlooking something?” I think he was thinking . . fix it or she’ll have another one ordered within the hour!  He got up and went to look at it and I showed him where I was having the problem. Somehow, he looked at that same diagram I’d been looking at for hours, and he decided the thread went in a different spot from where I was putting it. About 30 seconds after he sat down with it, it was working. 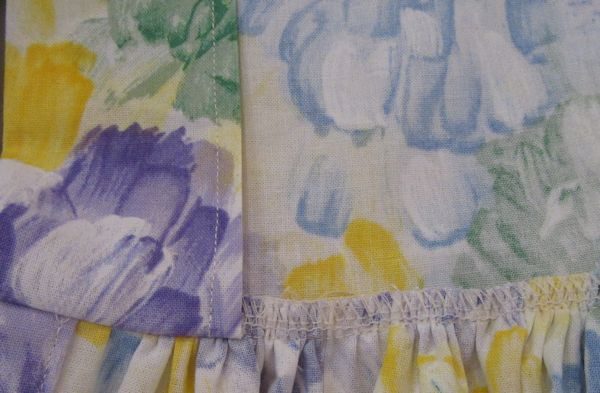 Many of the seams are French seams but in places where they aren’t, it’s nice to be able to finish them nicely.

Vince is pretty handy to have around. I think I’ll keep him!  🙂