This is a copied blog post from March, 2010 and it continues to be one of my most popular posts. I’ve made this cream over and over and am never without it. I’ve given it to many people and they always love it. I am making it again this weekend and thought I’d share the recipe just in case there’s someone who hasn’t seen it.

One thing I’d like to add – when I was at the doctor a week or so ago, and he was getting that thorn out of my heel, he mentioned that my feet seem to be soft and smooth. I told him .. believe it or not, about 10 years ago, I had to use a prescription cream because my feet cracked and bled so badly. I told him about this cream and said it makes sense. He said he always recommends people use Vaseline and old socks to keep their feet smooth. This recipe has Vaseline in it and I suppose that’s part of why it works so well.

It is a bit greasy when first applied but once absorbed by the skin, it feels amazing. It’s inexpensive to make and makes great little small gifts.

The recipe I was given and have used through the years calls for Vaseline but some don’t like using Vaseline due to it being a petroleum product. Just use the ingredient list as a guide. Swap out anything you want to swap for whatever you want to use. I just made two batches . . one with Vaseline with cocoa butter, and one with with coconut oil.

Dollar Store, Family Dollar, Dollar Tree . . whatever you have near you probably has Vitamin E cream.

The basic recipe is this: 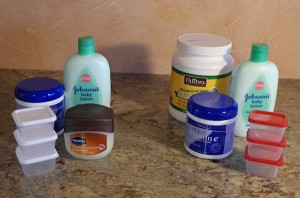 The little containers came from whatever Dollar store I went to . . don’t even know which one it was.

Simply dump the three ingredients in the mix, blend well and fill the containers. 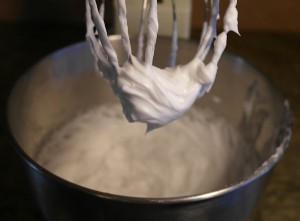 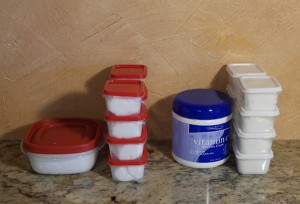