I can only imagine what Hatch, New Mexico must be like this time of year. I love driving up to the grocery store and the entire parking lot smells of roasting chile peppers. We had already bought 20 or 25 pounds of hot peppers. Once upon a time, I thought they only came in the non-hot variety but this year, we had a choice of mild, hot and extra hot. We chose hot and I can tell you this . . if those are hot, I don’t ever want to taste extra hot!

This past weekend we were at United and decided to get 25 pounds of mild peppers. I think they’re only roasting them in the parking lot for the month of August but I could be wrong. So, we got our peppers and they are so good. From now on, I’m getting the mild ones. I’ve already told Vince IF/WHEN we move away, we’re coming back to Texas for roasted Hatch chile peppers! Whether we will or not . . who knows! By the time we move away from here, neither of us will probably remember chile peppers. 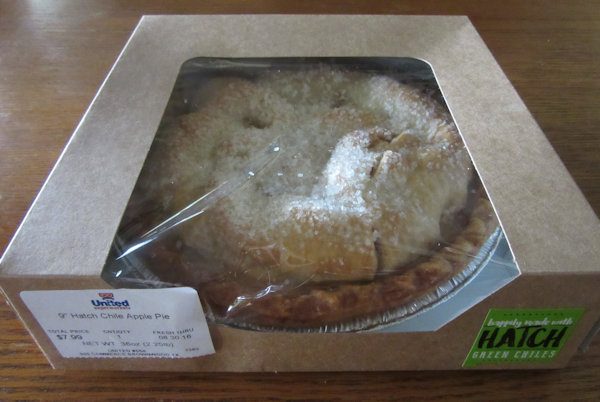 Vince was still out in the parking lot taking care of our pepper order and I tried it and it was so delicious. Vince came in and I said “You have to try this!” and he said “It doesn’t sound good to me!” Since I already had that pie in a box in my cart, I was thanking the good Lord! A whole pie to myself because he wasn’t going to like it!

The the lady handing out the samples, bless her heart, she talked him into trying it.

We were going to our friends’ house that night so I took the pie. They said they liked it.

It was really surprising how biting into that bit of spicy pepper, along with the sweet apple pie filling, was just a burst of amazing flavor.

Something to look forward to in August . . when the heat in Texas is just about to kill us . . we can be happy that Hatch chiles will be available, along with all the exciting things the folks make with them.