I am thankful that Vince can work on computers and loves doing it. I don’t usually ruin things but I seem to be pretty rough on computers.

One thing that happens that isn’t my fault as far as I can tell is that my fingers wear the letters off the keyboard. I don’t look at the keys when I’m typing so it doesn’t bother me but on the rare occasions when Vince has to use my computer, he gets so frustrated that most of the letters are missing. It happens with every computer I use and it’s happened for years. I’m not sure if I just use the keyboard so much or if my skin is to acidic . . I have no idea.

Another thing that is my fault is that crumbs (and sometimes Dr. Pepper) get under the keys. A crumb that is so small you wouldn’t think it could cause any problems can completely stop a key from working. I’ve learned that when a key stops working or gets sluggish and I have to mash it really hard, I just get a kitchen knife, lift it up just enough to keep it from popping off and blow under it and it’s sadly surprising how much “stuff” comes flying out.

The other day Vince had to use my computer and he was flipping out because some of my keys were harder to press than others. I went and got my kitchen knife and was prepared to fix it when he said “NO! That is not how you fix a compute!” Works so well for me! 🙂 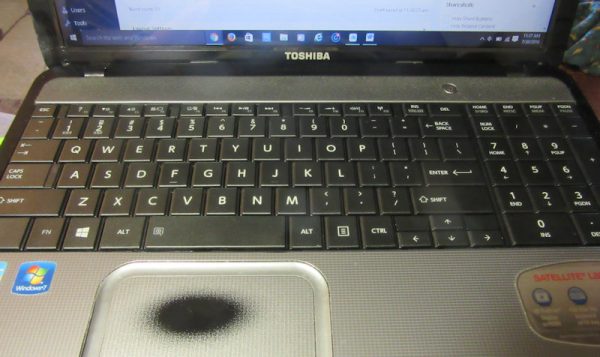 He said “I can order a new keyboard for $10.”  A nice, shiny keyboard with all the letters! It feels like a new computer, except it’s kinda lopsided and pieces are missing. You can see where I’ve rubbed the mouse pad bald.

Vince, who cannot take the old keyboard off and throw it away, had it out messing with it. He was so sure it was worn out and I tried to tell him . . no, there’s just too much “stuff” under the keys. He tapped it across his lap and crumbs, a stitch marker or two and no telling what else fell out. I think he believes me now . . too much stuff under the keys. He’s in there messing with it now and he said “You should see what’s under some of these keys!” I said “You might specifically want to look at the C, the M, and the R.”

I would say I’m going to do better and keep the new keyboard clean but I know how I am.