Whew .. this sock has been a whirlwind knitting experience!

The 4th (of 6) pattern for Tour-de-Sock was released July 1. Chad, Nicole and Addie were arriving late on July 3. Sad to say but my housekeeping just plain sucks so I had so much work to get done in the house. Not only am I a rotten housekeeper but, with most tasks, I jump in and get the job done. With housekeeping, not so much. I put it off til the last minute, assuming the cleaning fairy will show up and she never does. Aside from the dust and clutter, this house just isn’t childproof. There’s still some kind of smell in the room where Addie slept and I haven’t figured out what she poured or where – shampoo, hand lotion – something. There was medication, lotions, markers, scissors – you name it and I had to get it out of Addie’s reach. So, I was perfectly happy to sit and knit . . all the while thinking that I should be up cleaning.

When they arrived, I said “I didn’t get finished cleaning” and Chad said “I can see that!” Bad Chad!  🙂  But, darn it . . there were socks to be knitted and a girl can only do so much. 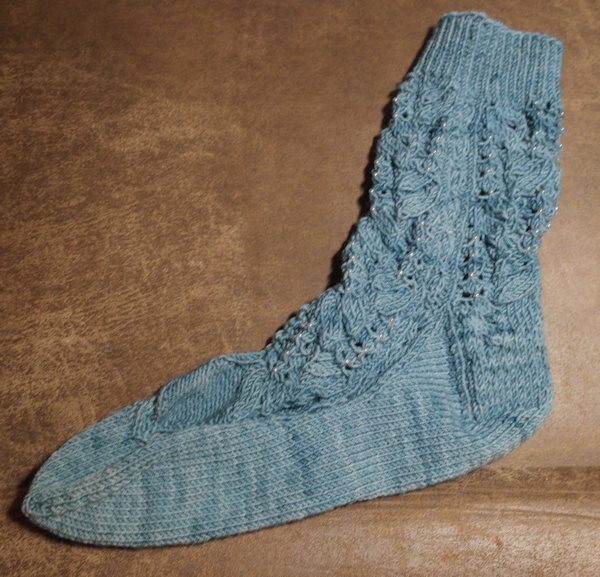 These socks have beads. I’ve wanted to knit with beads for so long. I had even bought beads for several projects but always put it off because I was scared to try it. I used the Super Floss method and it’s the easiest thing ever!

The evening Chad, Nicole and Addie arrived, I finished the first sock – that one was done in 2 days. I got the ribbing done on the second sock before they arrived. Because it’s a pattern that requires thinking, I didn’t knit much while they were here. As soon as they left on Friday, through my sobbing, I got back to knitting and late last night, finished the second sock. Tonight is the deadline so I barely made it. 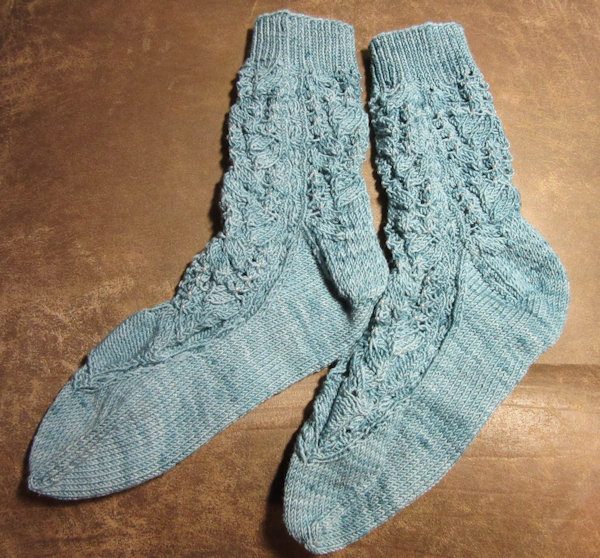 Once finished, we have to submit a picture. In this case, we needed the front, the back and the heel. The folks who run the Tour-de-Sock check to be sure we followed the pattern, knitted the required amount and they approve our projects. The heel is what’s called Eye of Partridge Heel.

After I submitted my pictures, I had time to go back and look at the other pictures submitted and wait .. my heel doesn’t look right! I went back and looked at the pattern. I think I did everything right. My yarn (Blue Moon Tigger Targhee) is very elastic and stretchy. I loved knitting with it and want to do a Hitofude with it but, either I screwed up the EOP heel or the yarn ate the design.

I went to bed thinking I had screwed up and my socks would not be approved. All that work and I wouldn’t finish .. which isn’t a real big deal because it isn’t like I’m going to win a prize or anything but I just don’t like not doing things right. 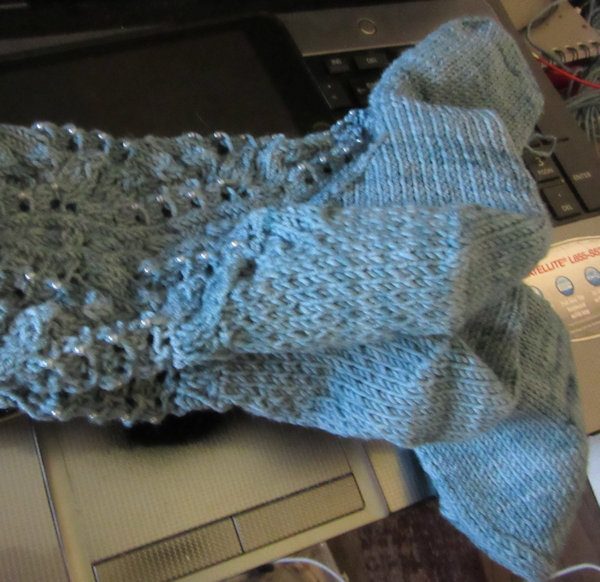 This morning I got up and it was still a bit dark in the house. Shadows cast across the sock laying on my laptop and I could see just a bit of the EOP so I took another picture and sent it in, apologizing for sending yet another picture. I was so happy to get an email from the TDS folks and they said “I see it!” so my socks count!

The next pattern comes out at 1:00 p.m. tomorrow. I’m so glad it’s afternoon. I have several things to do in the morning and I really need to get them done. This one will use two different yarns. It could be brioche, intarsia . . it could be anything but I’m up for the challenge!