These are the third socks for this year’s Tour-de-Sock patterns. These socks are a good reminder of everything I know and tell others, but sometimes forget myself.

For anyone who has asked me about knitting socks, one of the things I always say is “It isn’t brain surgery . . it’s yarn!” The worst you can do is mess up, rip it back and start over . . again and again til you get it right.

Another thing I tell folks with quilting and knitting is don’t worry about step #3, til you’ve done step #1 and step #2. Looking ahead and trying to figure it out only causes confusion sometimes.

Have you done a Stack & Whack quilt? Or a One Block Wonder? Or knitted a Hitofude? Do you remember the first time you read the instructions? They probably made no sense. That was my first thought. With all three of those things, I finally told myself . . just do it . . one step at a time and trust the pattern. By the time I made all three of them, thousands of people had already made them so I knew the patterns were right.

With the Diamondback Socks, so much of the pattern had me saying “What?” but those who had made the pattern already kept saying “Trust the pattern” so I did  . . or that was my plan in the beginning.

The pattern was released Tuesday morning. I had planned to use this yarn.

After seeing the pattern, I changed my mind and switched to this yarn: 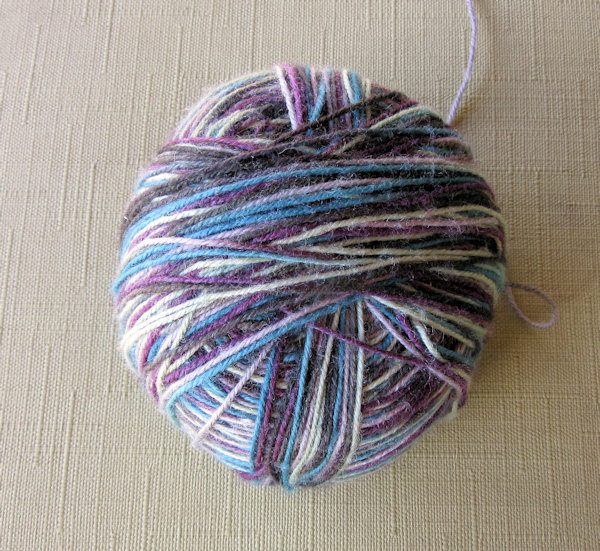 I started the socks, got a couple of inches into the pattern, knew I’d made a couple of mistakes, thought I had it all figured out so I decided to rip back to the ribbing and start again. Then I made a mistake in the first section and decided the pattern just wasn’t for me. Vince came home that afternoon and I told him I had given up on the socks. He said “NO! You never quit!” I explained that it was just too hard and I wasn’t enjoying it. I began knitting on other socks.

By Wednesday night about midnight, I was beginning to see pictures from other knitters and the socks were so fun. I read through all the “help” material, questions and answers and suddenly, something clicked and I knew where I was messing up. I wanted different yarn – something bright and fun! It was midnight. All my yarn is in the sewing room. I was not going over there by myself and I figured Vince wouldn’t be too happy if I woke him up and asked him to go with me over there to find yarn, and then he’d have to wait while I wound it. I began searching . . surely somewhere in this house, in all my knitting bags or drawers I had one skein of sock  yarn already wound. I found one! Perfect! 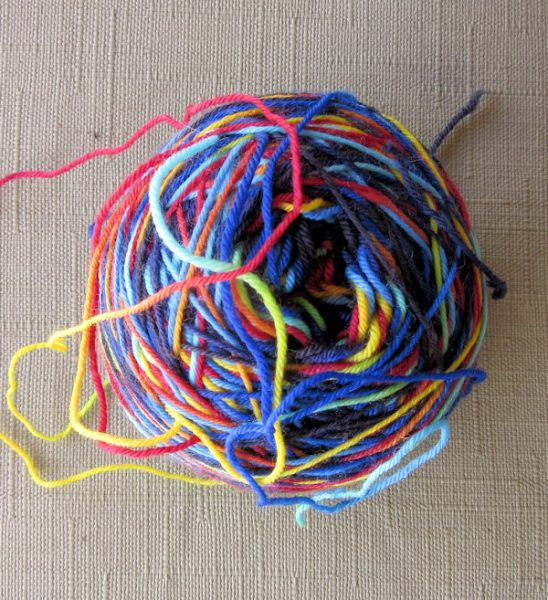 I began knitting. The ribbing is 20 rows so it was getting close to 1 a.m. by the time I got done with that but I just had to see if I really knew where I had been messing up. By golly, I think I had it! Vince came home on Thursday and I had about two-thirds of the leg done. He was surprised I had started again.

The pattern is so fun and once you figure it out, which everyone else seemed to do with little effort, it’s interesting and fairly quick to knit. 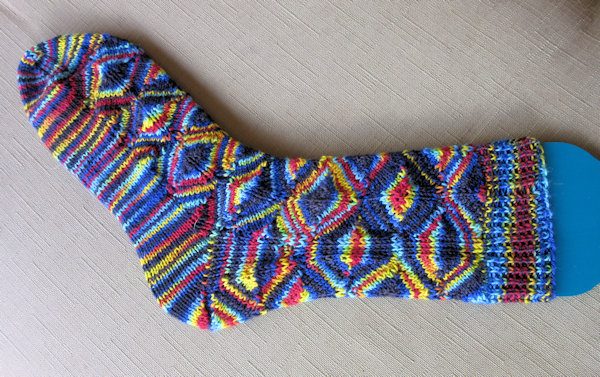 Here’s the top view, without yet being soaked and blocked. 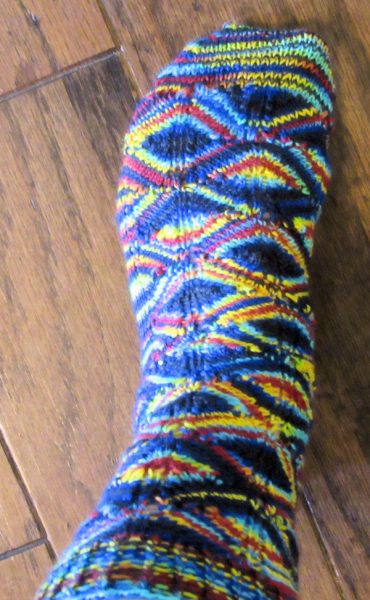 Here is the bottom of the foot and  you can see what the yarn would knit up looking like if it had been done in plain stockinette. 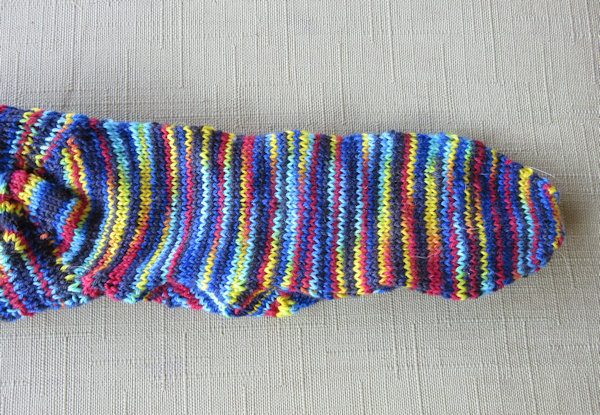 If you’re a sock knitter and if you can do basic knitting, I think you would love this pattern. The pattern is so well written and explains everything perfectly. I highly recommend it. I’ve not had much knitting time since I figured this out but it is a fairly quick knit. Several folks have already made two pairs (yes, FOUR socks) while I was working on one sock!

Here are a few things I learned while making this first sock:

Just like when I made my first Stack & Whack, or my first Hitofude, the entire time I’m knitting, I’m thinking about other yarns in my stash that I can use to make another pair of these.