It seemed like the second sock took forever to get made! The color is closer to right in this picture: 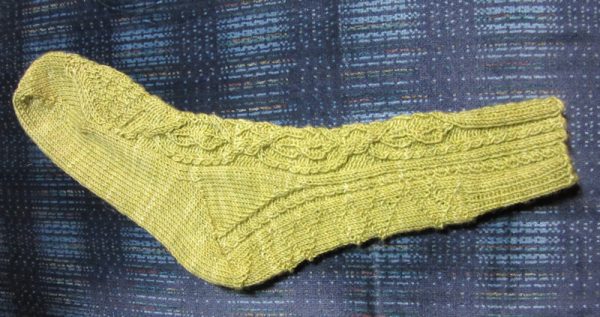 Here are the pictures I took this morning:

I Remembered It Again

The pattern was totally charted and I might have learned to love charts doing this pattern. 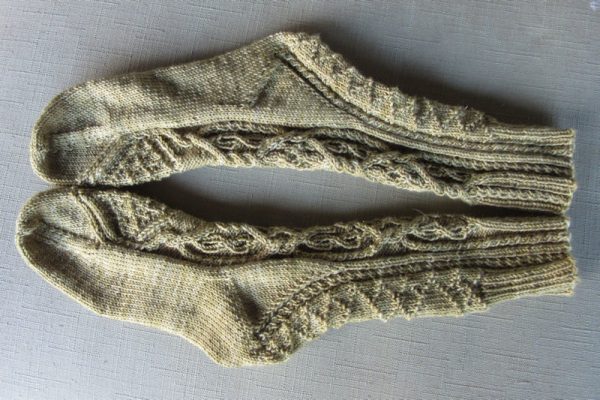 I Remembered It Again

The pattern is I Remembered It Again by Heidi Nick. If you’re a sock knitter and haven’t seen her patterns, check them out. I love them but I’ll love making them more when I’m not racing against the clock to get them done! These were started at 5:00 p.m. on Saturday and completed at 2:00 a.m. on Wednesday and at least 100 folks finished before I did — amazing fast knitters! 3.5 days to get two intricate socks done is just too hard for me, but I did it and I love the socks.

The yarn is Miss Babs Hot Shot (color is Spring Green). Depending on how well this yarn wears, this could be my new favorite sock yarn. It’s 80% superwash merino/20% nylon so I’m hoping it wears/washes well. It’s very tightly plied, which should mean less fuzzing, and it’s very springy so that cables and texture show up quite nicely. It was not splitty at all. There were several spots where I had to rip back (trying to watch something on TV, talk, knit, cook . .) and I never once saw any of the yarn wanting to untwist.

There’s a little voice telling me to cast on another pair using this pattern but I believe there’s some sanity left that’s not going to allow that to happen til after Tour-de-Sock (4 more pairs) and Camp Loopy are over!