I’m starting to get to the point where, when I walk out the door, I look for Cat. I feel kinda like “Where’s Waldo?” because I know that he’s somewhere, sitting quietly and very still, just waiting for me to scream.

Last night, about midnight, I went out with the dogs. I’m always a bit leery about going out so late because no one would hear me if something happened but as I see it . . there’s no more going to happen around midnight than around noon out here and there’s never anyone around so . . what’s the difference in going out by myself at midnight or at noon?

As I went out with Speck last night, something different caught my eye and as I gasped and turned around .. it was Cat stretched out in one of the patio chairs.

This morning, it wasn’t good daylight and I heard noises on the porch just outside the bedroom window.  My first thought was there was a rat in the charcoal bag but the noise got louder so I got up to investigate. There was Cat! There’s a tall fan . . the kind on a pole . . out there and Cat had climbed up on the fan and was investigating the bird’s nest. I’m thinking we don’t have to worry about baby birds pooping all over the speaker. 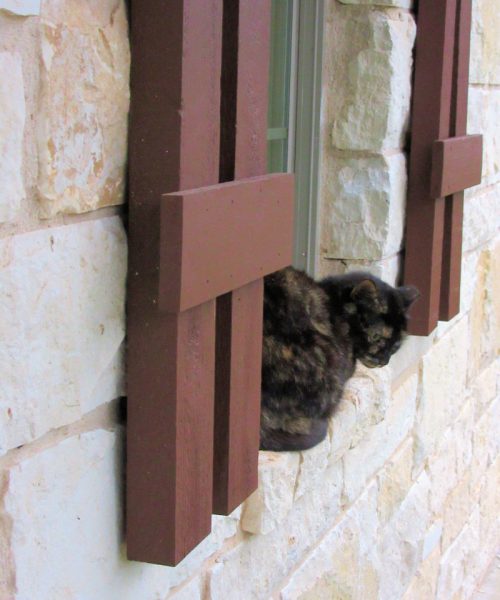 Later this morning, as I walked out to go put the meat on the smoker, which is under the carport across the driveway from the house . . I glanced to my left and there he was. It’s pouring rain. We have a 6 car carport. We have a 10′ porch across the length of the house . . why is he hunkered down on that windowsill, obviously getting a little bit wet . . except that he wants me to see him. 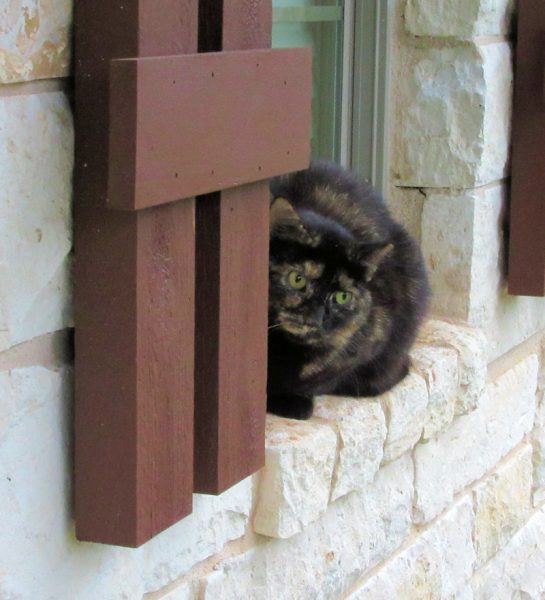 He turned to better watch me. I went out first and got the grills to bring them in and scrub them. Took them out. Decided I’d better move my car farther from the smoker. Went back in and got my keys. Went out and moved the car. Went out to take the meat to the smoker. Brought the meat thermometer in to wash it. Took it back out to put it in the meat. Went back in. Waited a few minutes and went out to check the smoker. Some times it doesn’t come on when it’s supposed to. 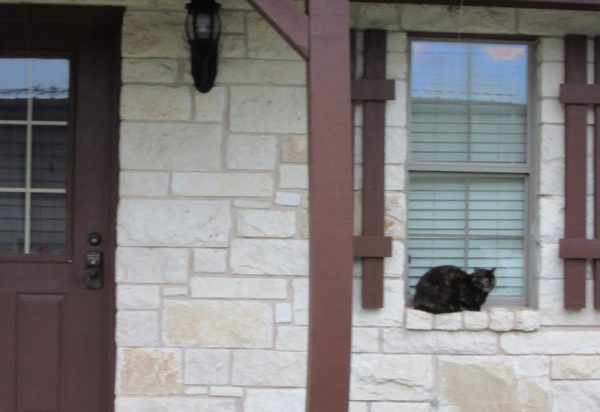 This is how close he is to the door. Yes, the post is bowed. I wanted to replace it but the decision maker said NO. Yes, the window has lost its seal and a new window is ordered. The screens are all at the glass company being remade with aluminum screen instead of fiberglass screen. Supposedly, grasshoppers won’t eat aluminum.

Considering how close I was getting to Cat, that’s huge . . a year ago we barely got a glimpse of him and kept saying “I think there’s a cat living here somewhere” but never could really see anything but a tail flying through the air as he was running away. 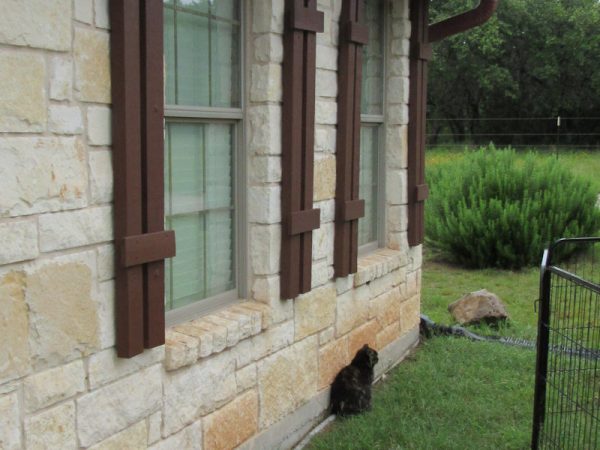 All those trips in and out and Cat didn’t move. But then I stopped on the porch and said “Good morning, Kitty!” and off he went. 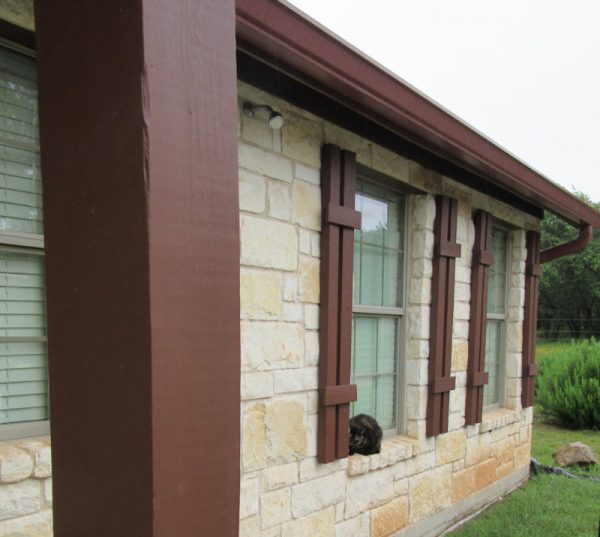 He didn’t go far though. A couple of hours later I went back out to check on the meat and there he was  . . in a bedroom window.

Speaking of cats, yesterday when Vince came home for lunch, he said he had seen a gray/white stripey cat in the driveway. Last night when he went out for something, he said he saw a small cat that looked like a little bobcat (it wasn’t — just looked like one) and he ran into the woods. That makes 9 cats, not counting Cat, that we’ve seen around here lately.

I’m only feeding Cat when he’s outside and I’m only giving him small amounts instead of leaving food out all the time for him. I am not feeding all the cats in Brown County!

The good news is that I have yet to see a live snake around the house this year (you know what’s going to happen now that I’ve said that) and I’m not going to say we don’t have mice in the shop because that would probably be a miracle, but . . we have not seen evidence of mice in the shop. Last year, I would turn the light on in there and I would see them scattering. No matter how careful I was with bird seed and grain for the chickens, there was always a bit that spilled and the mice were having a feast.

About the scorpions . . I’ve read that cats are allergic to scorpion venom and I’ve also read that isn’t true. I’ve also read that cats will keep scorpions away. I don’t know what’s true and what isn’t true. I find one article that says yes and one article that says no about the venom but almost all articles say cats do help keep scorpions away. Most nights I go out with a black light looking for scorpions. They glow under a black light and for the longest time, I would kill 3 to 5 every single night. This year, I have not found a single one outside and none inside (again, you know what’s going to happen since I said that). It could be the cats or, it could be that they’ve all drowned!