This project was started in January, 2015 and it has sat on the needles for way too long. I’m going to try to finish it as part of the MadMay (Madelinetosh May Challenge).

In fact, it sat on the needles so long that there’s a wonky row where the needles were. For a while, I’d carry it around with me . . to Missouri . . to Louisiana . . anywhere I thought I might grab some knitting time, but I never worked on it much.

I got it out over the weekend to figure out where I left off and see how much I have left to do. I had a lot left to do and I had a bit of time over the weekend and Monday evening to work on it. You can see how far I knitted from that wonky row, which I’m hoping will block out. 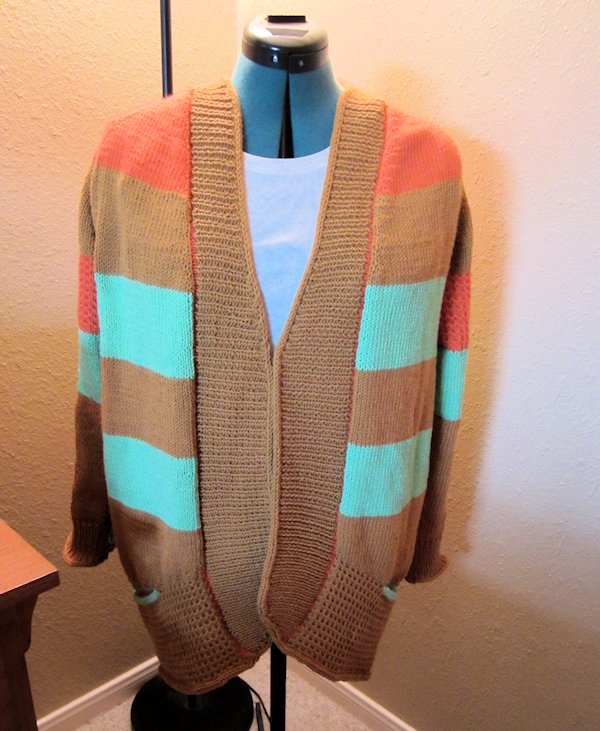 In September, 2014 I finished Nicole’s Blue Sand and I don’t remember struggling with the i-cord for the pockets but I struggled trying to make mine. I’m not going to tell you how many times I ripped back and started over because I’ve erased that from my memory (which is easy to do in my old age!) but I think I have them done now or, at least they’re as done as they’re going to get! 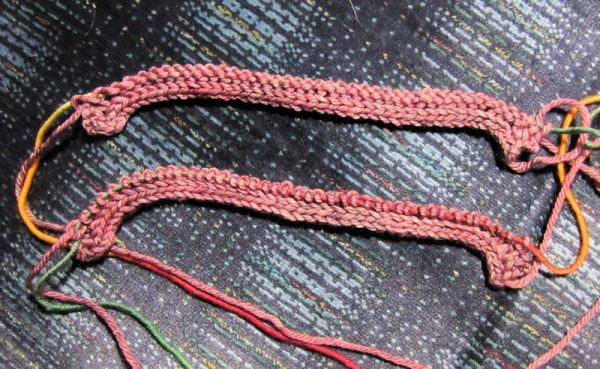 Of all the MadMay projects I plan to do, this is the only one that I can work on before May 1 so I’m going to keep working on it. I will not get finished before May 1 . . I’ll be lucky to finish by the end of May. I still have to do the pockets, all that bottom basket looking stitch, which they call the slip stitch pattern, then that wide neck band that goes down the fronts, then the I-cord bind off, then the sleeves. That’s a lot of knitting still but I will be so happy to have this sweater finished, along with almost 2,000 yards that I can report as used on the stash report once I finish the sweater!