Any time there’s bad weather, I always want brownies. I’m not a huge chocolate fan but I think it goes back to 1997 when Lake Charles, where it hardly ever even gets below freezing, had an ice storm. We went to bed that night knowing there was a chance of ice but during the middle of the night, I began to hear limbs breaking and that’s when I thought living in an all electric house might not be a good idea. At our house, we were without power for 7 days. Even though my parents were all electric too, they had a fireplace so at least we wouldn’t freeze to death. I think we made it at our house til about noon the next day and then we loaded up whatever we couldn’t live without for a few days and went to mom and dad’s.

The weather ended up getting warmer after a few days but there were so many lines down, that even with help from all over the country, it still took about 10 days to get all the power back on.

The folks in mom’s neighborhood were cleaning out their freezers and having big cookouts. It was kinda like a neighborhood buffet every night . . walk around and see who had what. One of mom’s neighbor’s built a solar oven out of aluminum foil and baked brownies and now, every time we’re snowed in (I should say WERE because that doesn’t happen much here in Texas) or we have ice or we have any kind of power outage, I want brownies and since my oven doesn’t work without electricity and half the time there’s not enough sun to use the solar oven, I just sit and want and do without. 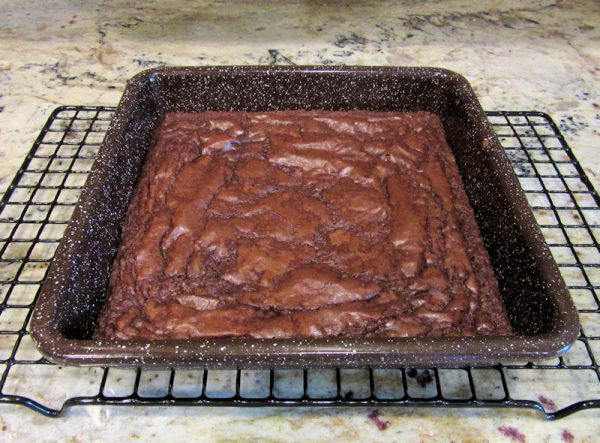 Today . . I decided I’d get the upper hand and make brownies before we lose power so I did! After all, if the power goes out, there’s a lot of Blue Bell ice cream that will have to be consumed quickly and brownies are always good with ice cream.

Back during the ice storm of 1997, probably after the kids all had too much brownies, Chad and one of his cousins collided and Chad had a huge goose egg on his head. Another neighbor was a doctor and he came over and checked Chad out by using the headlights of his car to look into Chad’s eyes. By the way, that doctor is the guy whose wife Steel Magnolias was written about.

What a neighborhood, huh? A doctor who can check out a kid’s injuries by a car headlight and a lady who knew how to build a solar oven and baked brownies!

At least if a storm passes through here, I’ll have my brownies. I should probably eat them now because depending on the severity of the storm, I might not get a chance. Yep . . brownies and ice cream . . coming right up!  🙂