It was definitely not warm in MO. Most of the time we had the heater going and one day we were out and Chad said “I hate to say this but I think it’s snowing!” I remember that feeling . . you are hoping winter is over. You’ve had some warm days and then . . it snows again! It was just a few flakes but just enough to remind those in MO that the calendar may say spring but it can still snow on some of us. 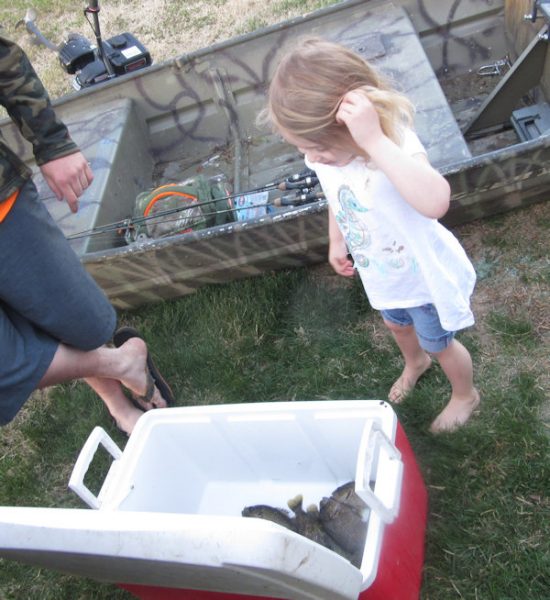 I had to laugh when I looked at the picture. Addie had gone out to see daddy’s fish and I snapped a quick picture. She’s barefooted but Chad is out cleaning fish with his flip flops on . . and a jacket, which means it’s pretty darned cold or he wouldn’t be wearing a jacket.

Oh well . . they both have on shorts. Thinking about the picture, I remember that Addie and I ran to Wal-mart and she had on shorts and a jacket! Maybe the shorts are just in defiance of cold weather towards the end of March.

It’s even been cold in Texas. Several nights this week, we’ve had lows in the upper 20’s and there are a few nights in the next week with lows in the low 30’s.  Pretty soon, it will be July and August and September and you know how much I don’t like summer!