Yesterday I smoked quail for lunch . . despite the electric plug we put in for the smoker giving me fits. Apparently putting in electrical outlets inside, outside, around the shop . . not a priority to the folks who built this house. We had an electric plug put on the outside of the shop, under the carport, for the smoker. When I first plug it in, it trips the plug and I have to reset it. Normally, that happens once. Honestly, what’s normal around here? Yesterday I put the quail in the smoker and waited around for the breaker to trip, walked out to the greenhouse to get some basil, came back and it hadn’t tripped so I went in the house. Then I needed something out of the garden and I didn’t smell smoke so I checked the outlet and it was tripped. I reset it, thinking it was good and later went out and it was tripped again . . and a third time. The electrician should be here this afternoon but it just about screwed up our lunch. I’m on a much tighter schedule with us having our main meal at lunch.

All’s well that ends well I suppose. I finally got the smoker going.

The quail were stuffed with jalapeno peppers, seasoned with Slap Ya Mama (of course) and wrapped in bacon. 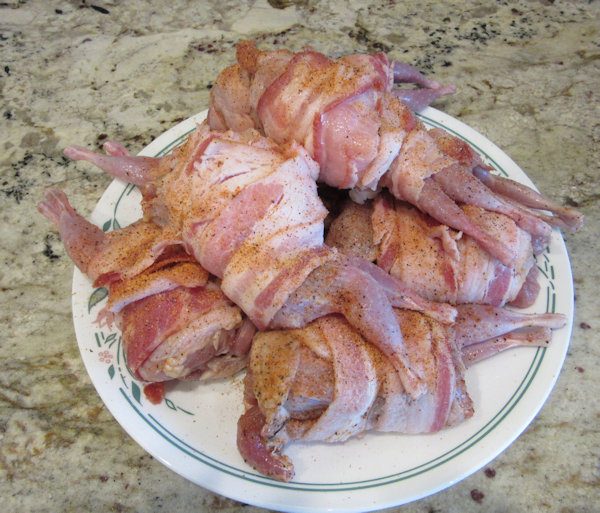 It was funny because I used one pressure cooker three times for lunch. I fixed spaghetti squash and I did half first, then the other half, then fixed pinto beans. 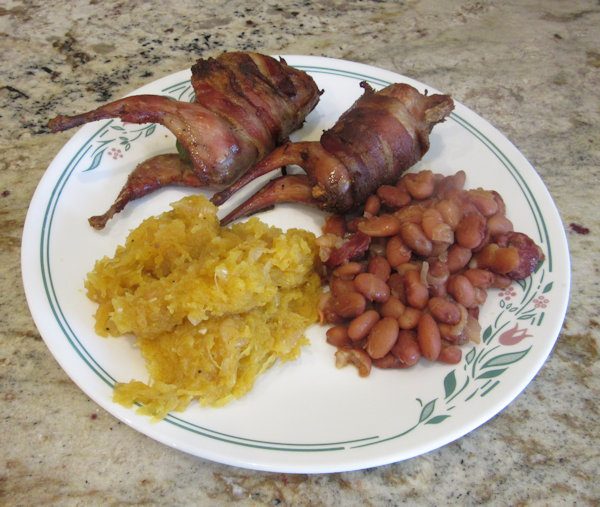 It was a great lunch and I fixed twice as many quail as we needed so we’ll have them again over the weekend.