There’s a knitting group that meets in Mason, a little over an hour south of here. It isn’t the hour’s trip that has kept me from going . . it’s a bridge I have to cross. Vince and I have been across it fairly often but he’s always driving. I always tell Vince . . just let me drive across to see if I can do it and he always says “not with me in the car!”

Yesterday as the day. The day I had to cross the Colorado River. 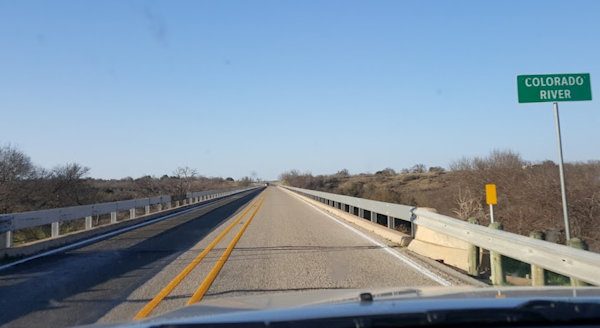 It’s very narrow and it’s kinda long. I’m meeting a pickup and it’s on the bridge already and you can barely see it at the other end. I did it! I didn’t look over the edge.

I had posted about it on Facebook Tuesday night and someone said “Sing a song that you love to sing with Addie” and that’s what I did!

When Addie was just barely talking, which I was think was when she was about 2 . . I can’t remember . . she was so attached to her mommy that any time Nicole was out of sight, Addie was pretty hysterical. One night when I was there, we ordered a pizza, and I said I would run get it. Addie wanted to go and I said “Mommy isn’t going . . it’s just you and me!” and she said that was fine. Her car seat was in my car so we buckled her in and away we went. I was so afraid she was going to start crying for Mommy as soon as we pulled out of the driveway so I started singing a made up song . . “We’re going to get a pizza! We’re going to get a pizza!”  She started singing with me and we were giggling. Once we picked up the pizza, I was making up silly words about the pizza being hot, and about the cheese being yummy, and then we’d go into the chorus . . we’re going to get a pizza. We’re going to get a pizza . . and she would sing along with me.

I’m glad no one could hear me singing “the pizza song” as I crossed that bridge but I made it and I was even smiling as I made it! I’m not ready to declare my bridge fear over but I won’t have any trouble crossing that bridge again.