For a while, a friend has been telling me about her cornbread recipe that starts with a cake mix. Last night I tried it and it was delicious. 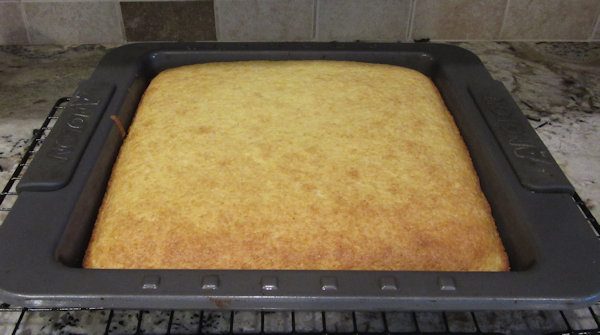 It wasn’t too “cake like” but the recipe did call for 3 T. sugar and I think next time I make it, I’ll use just 1 T. of sugar and see what I think. Even Vince said it wasn’t too sweet, but it was on the sweet side. I think it would be great with pulled pork.

Here’s the recipe as my friend gave it to me. After the recipe, I’ve given a dissertation on how I divided the recipe so we only had one pan of cornbread.

Instead of making 2 pans of cornbread, I mixed the dry ingredients, then weighed them and found that I had 30 ounces of dry mix. I put 15 oz. into a Mason jar to save for another day.

Then, to the dry ingredients I was going to mix and bake, I added and worked in a bit over 2-1/2 tablespoons of butter, then added 1 cup of milk. Instead of using 1-1/2 eggs, I used a large egg and a Bantam egg but you could easily use a large egg and a white or yolk only from a 2nd egg.

For the mix in the jar, I’ll just add butter, eggs and milk and make another batch next week when we have chili for dinner.