Welcome to our first Stash Report of 2016. Here, I will include both a yarn and fabric report. Feel free to include whatever you want to track in 2016 (craft related) and share your links here.

I was a bit confused about how to caption this report since this is just the third day of the year. There’s always a black hole between the last report of the year on a Sunday and the first report of the new year the following Sunday.

I did have one little victory to share. The Madelinetosh girls had a gorgeous yarn color called Stormborn and I really wanted it. I put it in my cart, dumped it, put it back in and went so far as even typing in my credit card number and then said . . NO! Use what you have. That was on the evening of 12/31 and I kept telling myself . . no one will know . . you’re ordering before January 1 and you don’t have to report it, but it’s the fact that I just don’t need it and I didn’t do it. Good Judy!

As far as my fabric report, I can pretty much guess I won’t be buying any fabric this year and I’m hoping I’ll use some but for now, nothing in and nothing out.

As far as yarn, for now, it’s the same thing . . nothing in, but I’m hoping to use lots of yarn this year. With yarn, as well as fabric, I’m not reporting til I’ve completed whatever I’m making. And, I’m going to track yarn in yards instead of skeins and hope that works out ok. 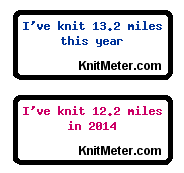