After posting that I’m back to buying eggs, I realized I need to do a chicken update!

The most surprising news is that a chicken I’ve thought was a hen for at least a year .  . is now a rooster.  I know she WAS a hen . . she was one of the chickens that other chickens had been pecking on so we put her in the “hospital” by herself and she laid eggs. I know this because the eggs weren’t easy to get and Vince said he would get them for me and after a while, she stopped laying.  I figured she would eventually start again . . chickens do that from time to time for a variety of reason but . . the other day I was out and I looked down and  . . she has spurs! WHAT? I came in and posted on Facebook “Can a hen have spurs?” Then I went back out to be sure I was seeing right and roosters have pointy feathers on their necks and hens have rounded feathers. What do you think she has? Yep . . pointy feathers. So far, she hasn’t crowed. All roosters have different sounds. It’s kinda like . . even if you have a dozen kids, you know which one is talking by the sound of their voice.  My friend, Bonnie, sent me a link explaining that a hen can change into a rooster. Weird.

The rest of the chicken news . .

You know that at one time, we had way, way too many chickens. We gave away about 45 bantams that were sitting on 90+ eggs that began hatching the night the new folks took them home. Then, we had 13 hens that had never been good layers and they were mean to each other and getting them to go into the coop at night was such an ordeal because the chickens in the coop wouldn’t let the others in. I was so aggravated with them all and then the same people said they would take them. Egg hens are not good meat birds so butchering them was pretty much out of the question. Feeding them to the coyotes . . maybe! We decided to give them to the folks who said they would take them. I said . . heck, while you’re at it, take the 5 in the other coop. They haven’t laid a single egg since September. You know . . that’s the coop that the hen/rooster was originally in. Maybe they all went through the sex change thing. I have no idea. It’s all too weird for me to wrap my head around.

While I was in MO, the people came and got all of them, leaving us with a grand total of 7 chickens. I thought it was 1 rooster and 6 hens. It’s a Dominique rooster, 4 Dominique hens, 1 black bantam hen and 1 Black Copper Marans that I’ve been thinking was a hen, but apparently I have 1 rooster, 4 hens and 1 of questionable sex. 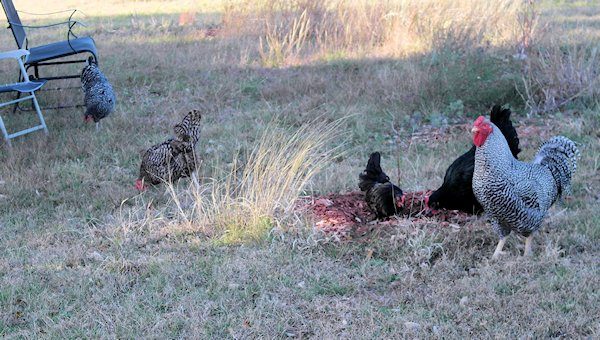 The weird thing is the black chicken gets along fine with the other rooster, which is unusual for two roosters to get along when there are only 4 hens with them.

It all just kinda really makes my head hurt and I don’t think much about it. Whatever it is . . it is. All I know for sure is  . . right now, we’re buying eggs. We’ll probably get more chickens in the spring . . my preference would be for that bantam hen to sit on some of the Dominique eggs and hatch babies and then I don’t have to introduce new chickens to the flock and go through all the pecking order re-establishment, or worse, have to feed and water chickens in 2 coops. There are 7 chickens in that coop and that’s one of our bigger coops. I could easily have 10 or 12 chickens in that coop. Six good laying hens would be plenty. If I’m sticking with the Dominiques, I probably need 8 or 10 hens to give us enough eggs . . we’ll see where we stand in the spring.

I love the Dominiques because they’re easy going, they don’t fight with each other nearly as much as some breeds. I guess just like humans, some roosters have one thing on their mind and they’re always harassing then hens. My Dominique roosters seem to be much more gentle with the hens. The Dominiques are not the best layers. Some hens will lay an egg almost every day. The Dominiques lay about 3 eggs per week. They aren’t friendly . . they aren’t mean but it’s rare to have one of them that, no matter how much attention we give them, will follow us around and want to be petted or eat out of our hands. I kinda like having friendly chickens. The best thing about the Dominiques is that they go to bed early! They’re always in the coop way before dark. That last batch of red chickens, I was out with a flashlight every night trying to shoo them inside.

Buying chickens is kinda like buying yarn. No matter what good intentions I have, once those babies start showing up at Tractor Supply, I melt and want to bring them all home. Hopefully I learned my lesson about getting too many . . we’ll see.