Vince and I were talking yesterday about how quickly we’ve forgotten what it’s like to live in a city. We’ve never lived in a big city so we’ve not known all the amenities of big city living but out here, it’s way different from even living in a small town and it’s part of a way of life that’s been forgotten by so many. We have propane tanks instead of what we always thought of as an endless supply of natural gas being piped into our home. If the propane tanks run dry, we have no heat, no stove, no hot water and no clothes dryer (though we do have an electric dryer in the shop and a clothes line). The propane guy makes rounds but for some reason, except for the greenhouse, we only need our tanks filled about half as often as most folks out here so we usually just call him and say “when you’re in our area next time, come by”. He knows that I always make that call when I’m about 50% down so he doesn’t have to rush out here.

We have well water – a well that doesn’t work if there’s no electricity and there’s definitely not an endless supply as opposed to city or rural water that comes through the pipes – treated water with fluoride probably added. Ours comes straight out of the ground with no treatment other than a water softener and it’s amazing water. We had it tested before we bought the house and we’ve had it tested again since we’ve been here and it’s good, clear and safe water.

And, we have no trash pickup. We pay $5 for as much as we can haul into the landfill – truck load, trailer full . . whatever we take. We have a big toter type can. Anything that can be composted goes into the compost bin or to the worms. Since we use so much food out of Mason jars, we don’t end up with a lot of cans to throw out. We don’t have to go to the landfill too often and it’s less than 4 miles from the house so it isn’t bad at all.

We have some cold weather coming and the 250 gallon propane tank for the greenhouse was down to about 48% full. The 500 gallon tank for the house was about 70% full and the 250 gallon tank that we use for filling our small bottles was 75% full. Monday we called our propane guy and told the lady in the office what our percentages were and asked that John come by next week or the next week . . whenever he’s out our way. She said she didn’t think he was going to be out our way and he was taking off today (Christmas Eve) and tomorrow, of course, so it would be next week. 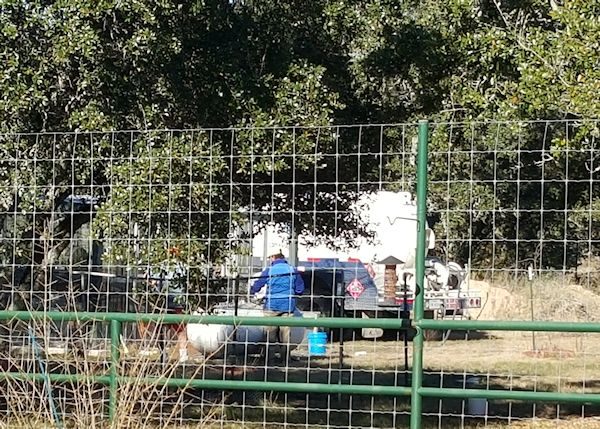 This morning I was in the kitchen and I kept hearing a truck. I thought it was UPS but he never came by the kitchen window. Then I saw Vince walking across the driveway . . and I realized the propane guy was here.

I went out there and I said “Why are you here today? It’s Christmas Eve!” Being the best propane guy ever, he said “It’s supposed to rain this weekend and I was afraid I’d leave deep ruts if I filled the greenhouse tank after a big rain.” How nice is that? And I totally forgot to get him something for Christmas!  🙁  I’ve added him to my list for next year!

Vince just informed me that the tomatoes I’m getting from the greenhouse . . about $17 each!  The fun I’m having . . priceless!  🙂