You know about my obsession with United’s marked down meats. Yesterday I needed a few groceries and some fruit. Most of my groceries come from Aldi but most of my fruit comes from Kroger or United. I can’t leave the United store without checking their marked down meat.

Here’s a deal I found yesterday. 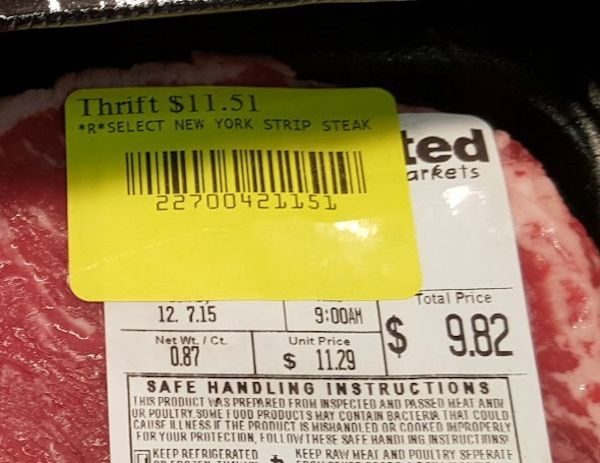 But while I was there in the meat department, I heard two employees talking about two country hams that were left from Thanksgiving. I couldn’t hear everything they were saying but one guy was talking about how good they were and the other guy had never heard of it.

When Vince and I first met, he was living in Georgia and I was living in Louisiana. I had no idea what country ham tasted like. Vince loved it. I was pretty anxious to try it . . and when I tried it, I did NOT like it. It tasted like pork gone bad and it was way more chewy than a regular smoked ham. It grew on me though. Vince would have country ham for breakfast every day if I would fix it. It was easy to get in Kentucky but finding it around here, even sliced and in a package, isn’t easy.  There’s a Walmart about 30 miles from Chad that has it sliced, in packages, and I’ve brought it home for Vince.

Before Thanksgiving we were in Brookshire’s and they had a whole Smithfield country ham. We were so happy to see it in our town so we bought it.

The United guys hauled the two hams into the back . . I was assuming to mark them down. I did my shopping and a couple of times I passed back by the meat department to see if they were marked down and returned to the meat counter but . . they were not.

It surely would have been nice to get two that were marked down . . so long as the marked down price wasn’t more than the original price!