Last week, my friend brought over a jar of chocolate sauce and a jar of caramel sauce that she had made.  For some reason I tried the chocolate sauce first. I dipped a spoon in the cold, thick, rich sauce and licked the spoon, knowing it would be delicious because everything she makes is delicious but really . . chocolate is chocolate and I’m not a huge fan.

My mom always made chocolate fudge during the holidays and she used the recipe that was on the Hershey’s cocoa can. I’ve continued to make it but the main reason I make it is for this step:

Boil, without stirring, until mixture reaches 234°F on candy thermometer or until small amount of mixture dropped into very cold water, forms a soft ball which flattens when removed from water.

Oh, I love those icy cold, thick, gooey little chocolate balls! If you compare the fudge recipe and the chocolate sauce recipe, you’ll see they are very similar!

That first taste of my friend’s chocolate sauce . . *exactly* like those little balls of fudge in the ice water.

I debated whether I should tell Vince how good the sauce was. There was a good chance I could eat the whole jar without him ever knowing it was here . . especially if I kept it hidden in the fridge, but I decided to be a good wife and share it with him. 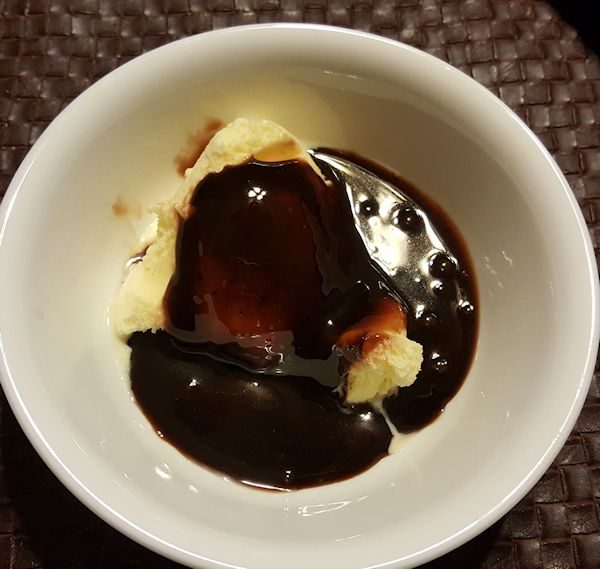 The first time we tried it, we heated up the sauce but it melted the ice cream so the next time, we just put cold sauce on cold ice cream and it was beyond delicious. This is probably something I will always have in my fridge!

With my friend’s permission, here’s her chocolate sauce recipe.