There wasn’t a lot of time for knitting over the weekend but I made a little bit of progress on my Hitofude. 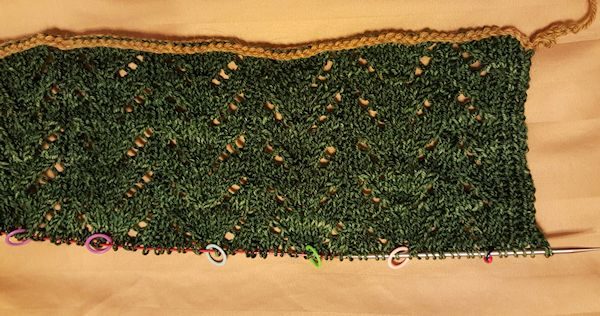 Two more repeats have been done since the photo was taken so I’m now half finished with the sleeves.

This pattern is definitely not hard and after a few repeats, I have the lace pattern memorized, though I still wouldn’t work on this while traveling or in a doctor’s office, I can do it and watch TV with Vince. The construction is interesting, the pattern is intriguing and it isn’t boring at all. So many of the people who have made it have gone on to make a second and third . . I’m understanding the fascination with the pattern and have thought about what yarn I would use if making a second one.

If you’re a knitter and you’ve thought about making a Hitofude, I highly recommend it.