It seems that Cat is here to stay and I sure with he had a name other than Cat but Vince thinks naming him means vet bills. What Vince doesn’t understand is . . catching him means vet bills.  Someday I am going to catch him . . when I figure out how to work the trap, and then he/she is going to the vet to get neutered/spayed. The last thing I want is a million cats hanging around . . though from the number of mice I surprised in the shop just before daylight this morning . . a million cats may be just what we need. I told Vince . .  you’ve been complaining about how much money you’re spending on chicken feed . . dude . .  you’re spending more on mouse feed because they are chomping down on the chicken feed Vince leaves in open buckets in the shop. I know . . but Vince doesn’t seem to know . . that any open container of any kind of grain is like a mouse magnet. I wish I had gotten a picture of those mice scurrying off when I turned that light on because I don’t think believed me when I told him how many I saw.

Anyway . . Cat is like a clock. Every morning he’s out waiting by his food bowl. If I’m a few minutes late getting out there, he just sits and waits patiently for me. He eats and then goes and does whatever he does all day. Sometimes we catch a glimpse of him late in the evening but mostly just early in the mornings.

He hung around a bit later this morning. He was on the pipe fence when I went out to clean the coop. 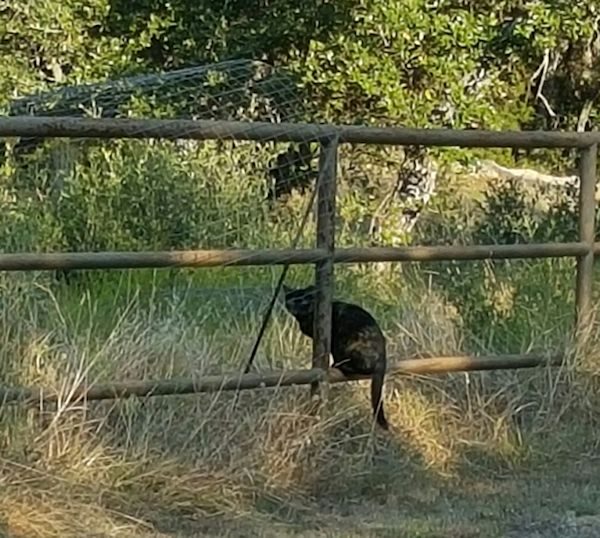 If you see him from one side, he just looks like a fairly unattractive cat. 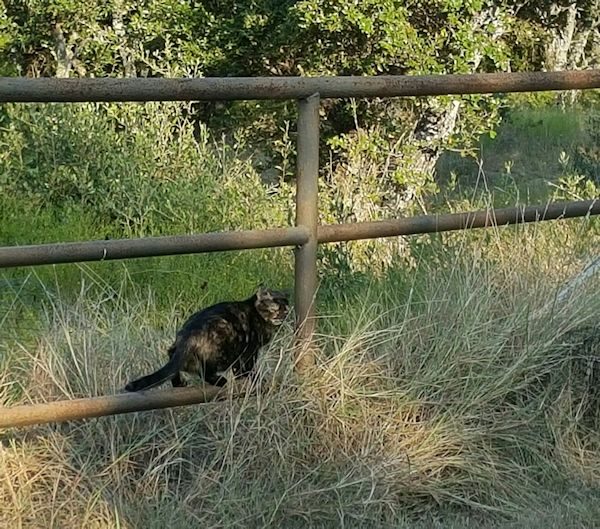 He’s downright unattractive! Poor kitty. I wish he would let me pet him.  His coat is looking smoother and shiny now that he’s getting decent food and water. He’s just never going to be a pretty cat but we do appreciate his efforts to rid us of rodents.

I left the shop door open til I had to go run some errands, hoping he’d find the mother lode of mice in there but I don’t think he ever went back that direction.