I am so sorry. I could have sworn I posted the first chicken story here but it was a discussion on Facebook instead. Some of you will remember that we started out with 10 red hens and five bantams about 3-1/2 years ago. The bantams were: Thelma, Louise, Tiffany, Roscoe and Otis. When you get those chicks at Tractor Supply, you’re never sure what you’re getting, even when they say they’re all pullets (girls) but when you get straight run (boys and girls), we’ve always ended up with about 60/40 boys/girls. There were other chickens but only the bantams seem to multiply like crazy.

Otis turned out to be a crazy rooster and we gave him to a friend. Thelma and Roscoe were roosters and they fought so we put Roscoe in the coop with the 10 red hens. Roscoe and Miss Hattie fell in love and were inseparable. Roscoe, being a bantam, only wanted to sleep in the tree tops and we could not keep him penned up. He would go straight up and escape every chance he could. Miss Hattie learned to get out of the run . . no matter how secure we thought it was, she, and only she from all 12 hens, would escape every day and spend her time galavanting with Roscoe. Then, one night, an owl or something got Roscoe and that was “The End” for him.

We still had Thelma, Louise and Tiffany in bantam coop. Bantams LOVE to hatch eggs. Louise and Tiffany were both sitting on eggs when, in December, 2013, dogs came through and killed all of the chickens except 3 or 4 of them. I wasn’t sure how long before Louise and Tiffany’s eggs were to hatch but it was December, it was cold, and the nest had been unattended for at least 6 hours. That night, as we were cleaning out the coops, Vince said “These eggs are chirping!” We took the chirping eggs and put them under lights and I think 6 of them hatched. Then, we were at Tractor Supply and we found 4 more bantams that were so cute so . . in early 2014, we had 10 bantams. They hatched eggs and they hatched eggs and every time I’d catch them just starting to sit on eggs, I’d say “NO” and I’d take the eggs but it was a losing battle.

We have friends who said they would take them. I asked Vince “You didn’t tell them how many, did you?” He said no! Thankfully!  Sunday evening they came to get the chickens. 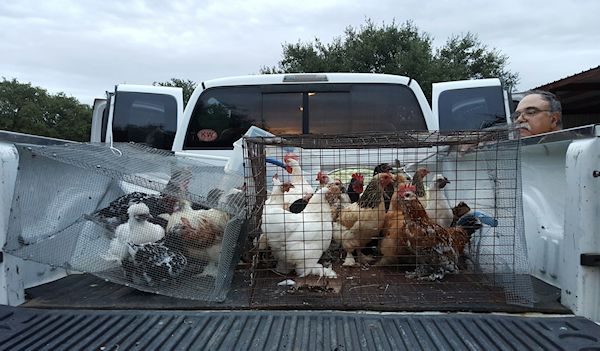 There were 41 chickens . . actually 42 since I found the little black one the next day and took him to them. Included in that number were 3 Anconas and 1 Black Copper Marans hen. 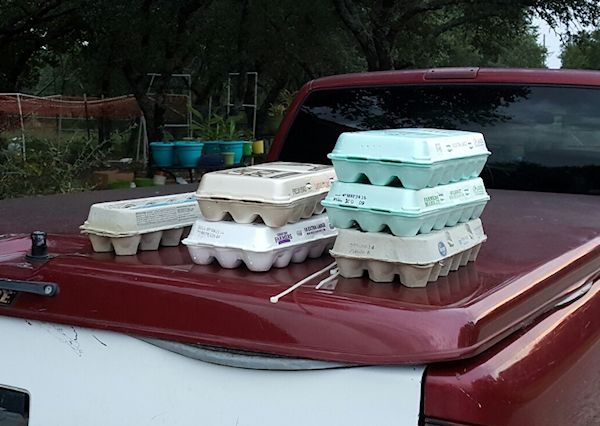 And, there were 93 eggs those chickens were sitting on. Can you imagine if even half of those would have hatched and then we would have had almost 100 bantams. Oh . . I can’t think about it.

The problem for me is that we had 6 coops with chickens and each coop has water inside and water outside. Every day, at least once a day, I have to scrub those water containers and refill them. Often, I’m doing it 2 or 3 times a day on hot days. Those are big 5 gallon containers and I rarely do it that I don’t get covered in nasty chicken water (or worse) and then I have to come in and take another shower.

Plus, we were over run with eggs. I didn’t want to mess with selling eggs so I was giving eggs away, buying egg cartons, paying for feed . . it was crazy.

Now we have 13 chickens (10 red hens and 3 Iowa Blue hens) in one coop. In another coop, we have 1 Dominique rooster, 4 Dominique hens and 1 Black Copper Marans hen. In one more coop . . and I think we’re going to give these away, we have 1 Speckled Sussex rooster, 1 Speckled Sussex hen and 2 Black Copper Marans hens. If we get rid of those, we’ll have 19 good chickens in only two coops to maintain.

With winter coming, I’d be dealing with frozen water, keeping heat going in 6 coops when the temps drop to single digits, prying open 6 doors when they’re frozen shut. Having 2 coops and 19 chickens instead of 6 coops and 66 chickens, plus all those babies that would have hatched . . much better for this old granny.