Chocolate has never been something I was crazy about. There are a couple of candy bars that I will eat from time to time . . maybe 4 or 5 times a year. I like Almond Joy, Reese’s Cup, Kit Kat but on rare occasions. Things like Hershey’s Kisses, or chocolate ice cream or chocolate cake . . never! 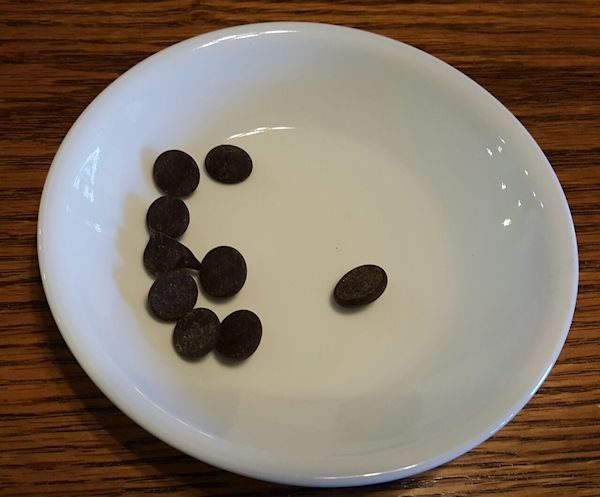 When I got home, I began to snack on the ones she had given me earlier. I just grab a few several times a day . . probably more often than I’m thinking but they say dark chocolate is good for you, right?

A couple of weeks ago, my friend was going to order more chocolate so I ordered a bag too. After we placed an order, I think we were both a bit apprehensive about ordering chocolate to be shipped to Texas in September. We both paid for “warm weather shipping” but I think there might be a difference in “warm weather” and “HOT weather”.

I’m happy to report that both of our bags of chocolate has been delivered this morning and both bags, and their contents, are in perfect shape! 22 pounds is a lot of chocolate. I thought about trying to figure out how much weight you would gain if one ate all 22 pounds but then I figured that would take all the fun out of eating it.

After lunch, I will bag it all up in 1 pound bags and put it in the freezer. I plan to share some with Nicole so I won’t be eating all 22 pounds . . maybe!  🙂