Addie’s baby bed was one of those kinds of beds that converts to a big girl bed but for some reason, they never could get it to work right. It was over a year ago when they put Addie into a big bed and when they couldn’t get the baby bed headboard and footboard to work, they brought an older bed frame home from Nicole’s grandparents’.

Nicole’s dad is a builder/cabinet maker so she grew up comfortable working with carpentry type tools. She came up with an idea for siderails that would work with the baby bed but somehow . . they didn’t work, so for a year, Addie’s been using the older bed. It was functional but wasn’t very pretty.

Last night during the night . . don’t ask me how or why, but Nicole had an idea of how to make the rails work that she had made. She couldn’t wait to get Addie out of bed so she could disassemble the old bed and try her new idea. 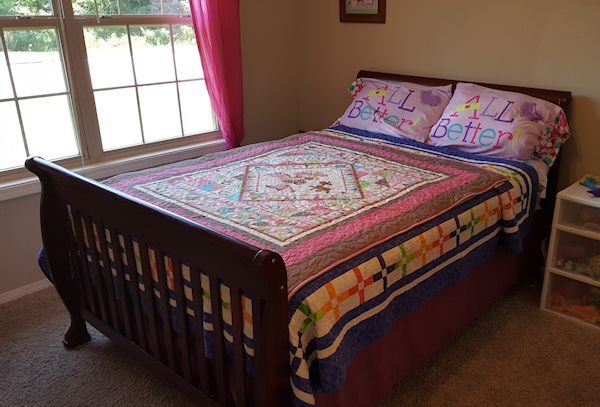 Her idea worked! We had to run to Lowe’s and get some longer screws and she ended up having to screw the slats down to the side rails but it worked great.

We decided not to tell Chad what she had done and see if he noticed. When he was home at lunch, we got Addie to lure him into the bedroom. He stood there for a minute like he was trying to figure out what was different and then he said . . Hey!  When did this happen?

Nicole can do so much . . she was so excited to get that bed put together.