There other day there was a picture going around Facebook of some giant centipede or millipede . . I can’t remember what and I’m not even sure I know the difference (nor do I care enough to look it up!) Quite a few of my friends sent me the picture with things like “aren’t you glad you don’t have these!”

Vince sprays around the outside of the house but I don’t want him or any pest control person spraying inside the house. Soon after he sprays (and he leaves an area that he doesn’t spray so I can take the dogs out through that spot), we find tons of dead bugs.

Yesterday I was walking along and I happened to look down right at the edge of the house and . . wouldn’t you know it . . one of those giant things. 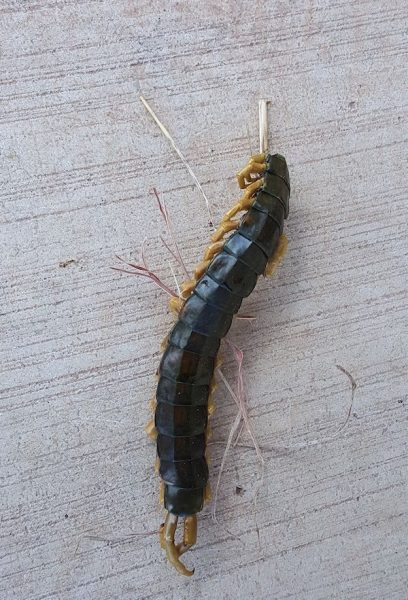 I’m not sure if it’s his head or his tail that’s missing but part of it is missing . . and he’s been dead for a while . . he’s pretty crunchy. I used tongs to pick him up and I could tell he wasn’t “fresh”, though I didn’t touch him with my finger. 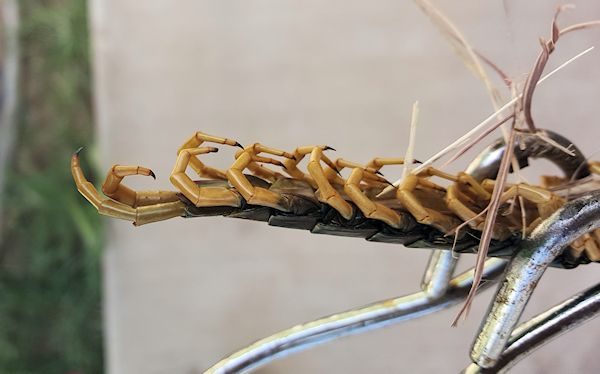 You can see in relation to the tongs what his size is.

What I’m thinking . . I’m sure he has friends and family members who are still around. There’s no way there was just one here.

It takes a crazy person to live here, doesn’t it?