I think it’s safe to say that Gypsy and Rose are gone . . never to be seen by us again. It’s been about 2 weeks since they went high tailing it off into the woods. I believe the blackish cat is here to stay. Now we have to try to catch him and get him neutered or spayed.

Someone asked in a comment if he couldn’t sleep safely in the shop and this was my response:

The shop isn’t really “animal safe”. We have a lot of chemicals and poisons that we use around the farm, as well as lots of things stacked that may not be safe for him to be crawling around in because they could cause a landslide if something gets unstable. We want him to sleep in the implement shed and there are safer places there and he can come and go as he pleases.

Another thing is that we can’t catch him and we never know if he’s in there or not and we don’t like to leave the doors open when it starts getting close to dark because of other critters getting in.

He probably would be miserable closed up in the shop since he’s somewhat feral. Can they be somewhat feral? I guess I don’t know how wild something has to be in order to be feral.  He no longer takes off for the hills when he sees us but we surely can’t get close to him.

Yesterday afternoon Vince asked if I had seen him and I hadn’t seen him all day. Vince said “I hope nothing happened to him!” Huh? YOU want him to stick around? I think the mouse situation in the shop about made a cat lover out of Vince. 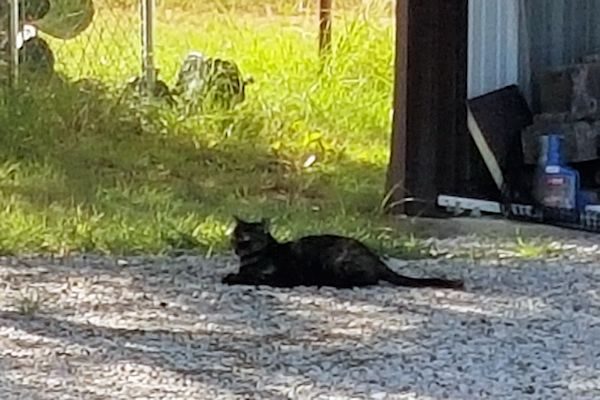 When Vince went out after breakfast this morning, there was the cat laying over by the carport. He looks pretty comfortable and “at home” around here! I asked Vince not to make any scary moves, I was going to try to talk my way over closer to him. Vince said “He is NOT going to be an inside cat . . EVER!” I know . . I just would like to be able to get close enough to pet him so I could at least put flea/heartworm meds on him once a month. As soon as I moved towards him, he was up and on the move. 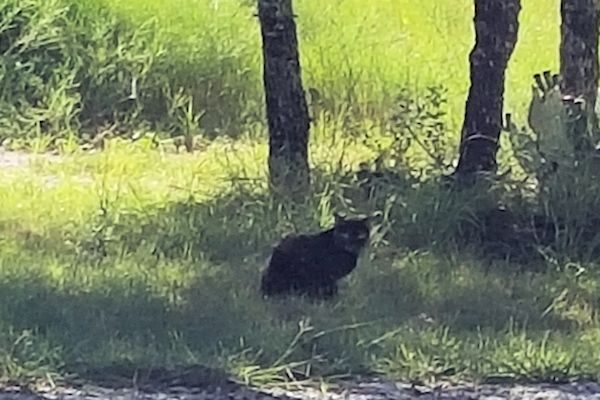 Another step closer and out into the tall weeds he ran. 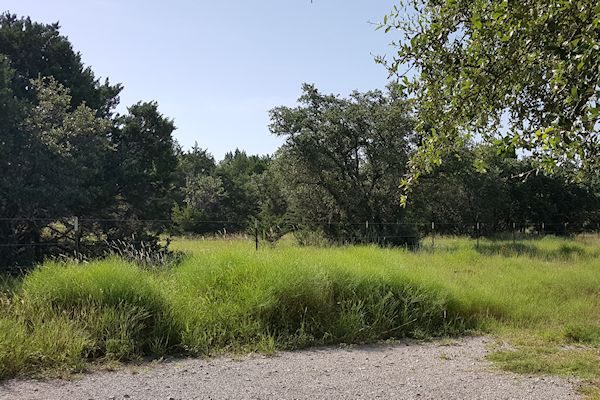 Can you see him back there? More amazing than any cat is . . it’s green in central Texas in July. I wonder how long it’s been since it was this green here in July .. definitely not in the four years we’ve been here. Driving down the road and seeing hay that has been cut, and cows grazing on the ranches . . that’s so nice. The first summer we were here, the ranchers had sold off most of their cattle because of the ongoing drought and it was unusual to find cows in the area but last summer we got a bit more rain and the tanks were holding water, and this summer has been almost tropical with all the rain. It’s so nice to see the green but everyone told us that if we ever had a wet spring, that would be the end of the grasshoppers. Not true. I think this is the worst they’ve been ever. We’re back to having to keep my mouth shut when I’m outside (you can imagine how hard that is!) to keep them from flying into my mouth. I’m constantly swatting at them because they fly right into your face. I’m about to resort to harsh chemicals . . they’re eating EVERYTHING!

OK . . back to the cat . . It’s weird and I know nothing about cats but it was about this time of year when Boots and a little orange kitty showed up. They were both small though. The orange kitty was wild and Boots was so friendly but the two of them were friends. We finally caught the orange kitty in a trap and took him to the shelter. They said he wasn’t feral because he didn’t try to hiss or bite them (I think that’s what they said) .. he just wasn’t friendly.

Boots has a lot of orange in him. When the sun shines on him, I see plenty of orange. This new cat reminds me of Boots with the shape of his head and how he sits. He’s black with a lot of orange. I don’t know if there’s any correlation or if it’s purely coincidence and I know there’s a zillion and one black cats with orange . . probably out in the woods around my house .. but I’m thinking they could be related . . somehow.