Those darned bantams have been sitting on the nests for months. Every day I’d retrieve all the eggs and  you’d think after a while they would give up but no . . they never give up. I finally decided . . if they want it that bad, I’ll let them hatch some eggs but I’d give them some full sized eggs to hatch. Then they kept laying eggs in with the full sized eggs and Vince would get the eggs and, even though the big eggs all had an “X” on them, and they were BIG .. he’d sometimes leave little Bantam eggs under them so who knows what’s hatching out there.

They’re so funny because they switch around. One day one chicken (or two or three) might be on one nest and the next day, totally different chickens are on the same nest. 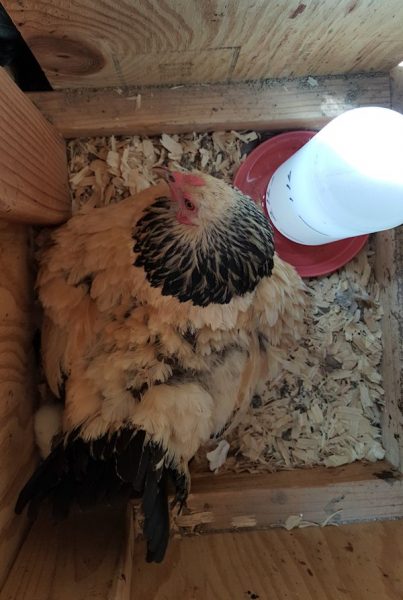 This girl was not even participating in the nesting chores til a couple of days before they hatched and now she’s going to think all the babies belong to her. So far, three under her have hatched. There’s a black one and 2 yellowish ones. 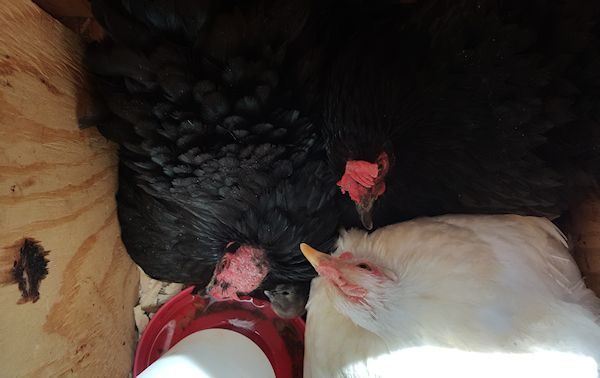 Three of them! It has to be miserably hot in there with three hens and two babies. I’m not sure if the hens are fussing at each other but one of them has no feathers left on her head. See the little head sticking up between them? That’s a little gray chicken. Not sure if it’s a full size or bantam but right now, that one is kinda uniquely colored. 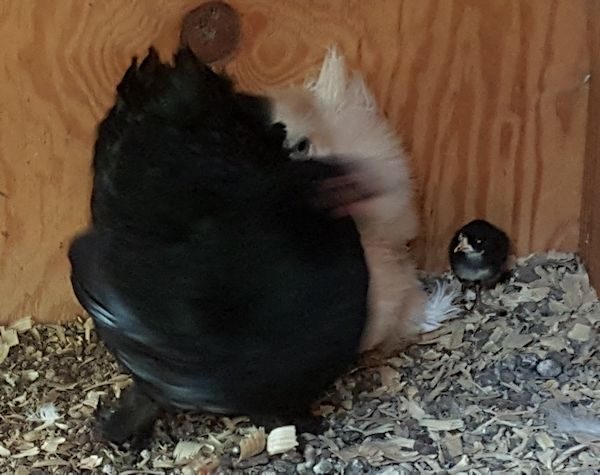 They were always on the nest together. The black chicken is mean as a snake and drew blood a couple of times when I was trying to retrieve eggs. They had more eggs under them but as soon as this little dude hatched, they moved out of the nesting box and onto the coop floor. I thought I could reach in and get the other eggs out but the black hen came charging at me in full attack mode so I had to get gloves on and get the not yet hatched eggs and give them to the other hens. Now I’m really confused about which eggs are hatching.

These two will do anything to keep me from even looking at this little guy! 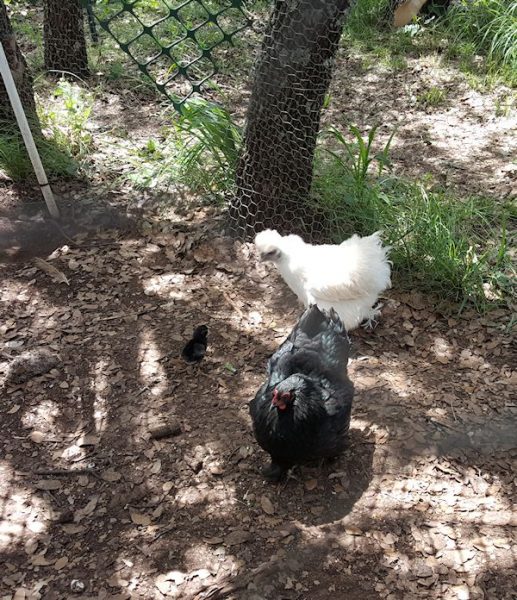 They even had him out in the yard yesterday morning but they were in a tizzy about me being out there with my camera.

So far, there are 6 that have hatched. Just what we needed . . 6 more chickens! But, they are so darned cute and it is so much easier to raise them when the moms are doing all the work instead of us having to use heat lamps and make sure they stay the right temp.